Lucifer Gets Full Season Order Based on Initial Ratings Success

The Hollywood Reporter and other media outlets are reporting that Fox’s Lucifer just received a “back-nine order” for a full second season.

The term “back nine order” is primarily used to indicate that a series has been extended to a full season of 22 episodes, after the first thirteen episodes of a season have been produced. 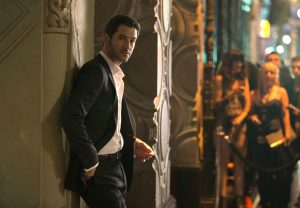 For any program, this is an excellent sign, but it is especially encouraging for a genre series like Lucifer.  Lucifer (based on Neil Gaiman’s character Lucifer Morningstar from the Sandman comic book series) has been very successful in terms of Neilsen Ratings, pulling in an average of 8 million multi-platform viewers per epiosde this season.

Fox entertainment president David Madden praised the series stating that,“Lucifer continues to deliver, with great blasts of dark humor and ambitious storytelling, The show has turned out to be a true wicked pleasure, the perfect companion to Gotham, and we couldn’t be more pleased to order these nine additional episodes.”

Luicifer airs a special Halloween-themed episode tonight at 9:00 on Fox.