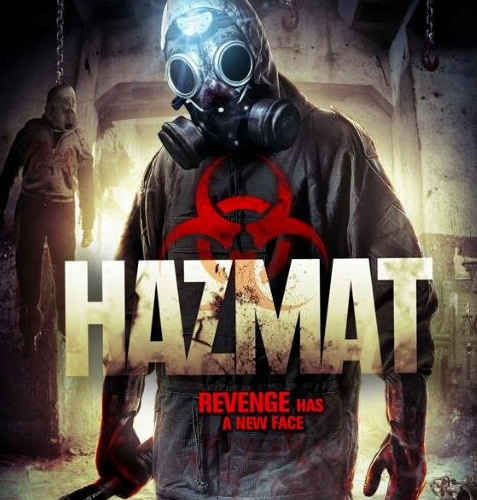 Trapped inside an abandoned building, a group of friends must fight for their lives from a disturbed ax-wielding maniac.

We caught up with writer/director Lou Simon to talk Hazmat.

Horror News Network: Can you talk about your inspiration for this movie?

Lou Simon: I had just had major surgery and was on bed rest for two weeks.  I was watching a marathon of “Scare Tactics” to pass the time.  Then, the premise came to me, “what if one of these days one of those victims think that it’s all for real and hurts one of the actors?”

Horror News Network: What impressed you the most with the cast of this film?

Lou Simon: How amazingly talented they all are.  Many are just starting out, but I think they have big futures ahead of them.  They were also willing to work under very harsh conditions.  The abandoned building where we shot the film was incredibly foul-smelling and incredibly dirty.

Horror News Network: Let’s talk about the slasher, Hazmat. What do you think sets him apart from other slashers out there?

In HazMat, most of the characters are older people —  the crew of a prank TV show that is pulling a prank on an unsuspecting chump. You get to know them, so they’re not just another faceless victim when the chump decides to exact revenge on the pranksters.  On the other hand, I wanted the audience to root a little bit for our villain, since he’s a victim himself for the cruel joke that was played on him.

Horror News Network: What proved to be the most difficult task while shooting Hazmat?

Lou Simon: The sound.  The week we started production, the city decided to repave the street in front of the abandoned building we were using.  We had to stop every few minutes because of construction noise.

Horror News Network: Can you talk a bit about being a woman in independent horror scene?

Lou Simon: I know there’s a lot of discontent out there by women filmmakers, who feel that the odds are against them.  I think that’s probably true in many industries, not just film.  I used to deal a lot with construction, and you get underestimated as a woman in that industry as well.  For me, it’s a rush to have to prove myself.  It drives me even harder, so I don’t mind the challenge.

Horror News Network: In closing, what would you like to say to our readers about Hazmat?

Lou Simon: It’s a fun movie that will entertain them.  It was made by a bunch of people who made huge sacrifices to see it made and who love film just as much as your readers do.

Horror News Network: Thank you for your time, Lou! Best of luck with Hazmat.