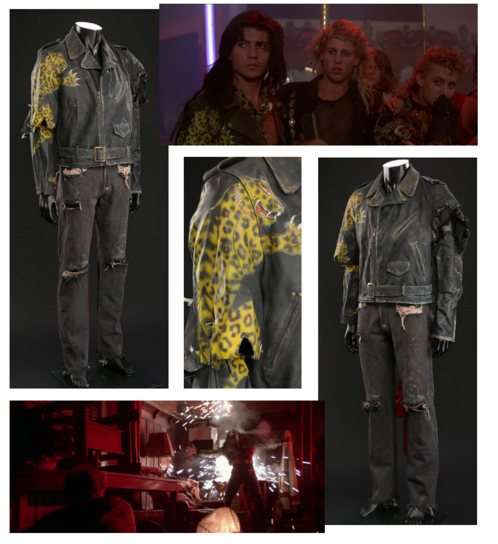 ‘LOST BOYS’ Leather Jacket to be Sold in Online Auction

LOST BOYS LEATHER JACKET TO BE SOLD IN ONLINE AUCTION

Prop Store is pleased to bring vampire Dwayne’s (Billy Wirth) Death Scene Leather Jacket and Costume from the  80’s classic The Lost Boys to their online auction site. Joel Schumacher’s 1987 vampire classic pitted a deadly group of vampires against a pair of brothers in a battle to save their family. The Dwayne vampire jacket on offer comes from the character’s death scene in which Sam (Corey Haim) shoots the vampire with an arrow, sending him back into a stereo which electrocutes him. Resembling a heavily worn biker outfit, this black leather Schott jacket fea- tures a hand-painted jaguar on the right shoulder, which extends down the arm. The sleeves have been cut at the elbow to accommodate Dwayne’s arms exploding during his electrocution. A long cut in the back of the jacket was likely involved with hiding the extensive effects rigging used to explode the character’s arms and head. Offered with the jacket is a pair black Levi jeans marked “B. Wirth” on the inside, referring to the actor.

This Lost Boys jacket is one of many Greg Cannom creations set to be auctioned at Prop Store. Over 150 lots of masks, maquettes, costumes, creature effects pieces and production ephemera spanning the award-winning artist’s decorated career will be available for bidding in a 2-week-long online auction. Most lots will be offered without reserve and the bidding gets started February 15th on the Prop Store website. You can register for the auction at http://propstore.auctionserver.net/view-auctions/info/id/38/

Over 50 films from Cannom’s 40-year career are represented in the auction, including Bram Stoker’s Dracula, The Mask, The Rocketeer, The Curious Case of Benjamin Button, Hook and Masters of The Universe. There’s even some- thing for Star Wars fans as the auction includes a Darth Vader helmet casting made from the original molds in order to be taken on a promotional tour following the release of Episode IV: A New Hope.

Some of the notable items collectors and fans can bid on include:

Brandon Alinger, Prop Store CEO, said: “We’re delighted to offer this exclusive collection of Mr. Cannom’s   award-winning work. The artistry embodied in these   creations is something not commonly seen in today’s films and   the opportunity to offer these incredible pieces permanent homes with people who can preserve their legacy is   very exciting.”

‘The Lost Boys’ Pilot Picked up by CW