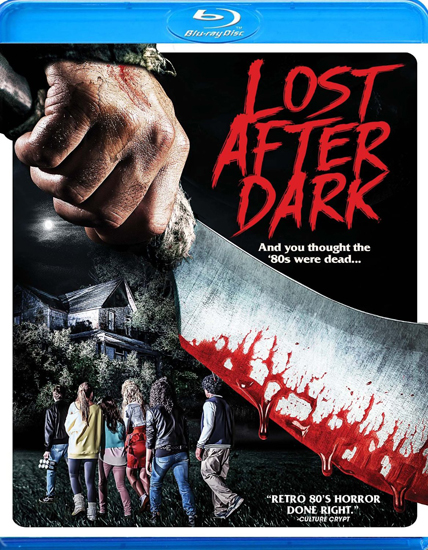 Synopsis: In this clever homage to 80’s slasher films, a group of teenagers looking to party get stranded when their ride breaks down, and end up being stalked by a cannibalistic killer.

Our Thoughts: ‘Lost After Dark’ is one of the best homages to the 80’s I’ve ever seen. It captures the spirit of the slashers of the time, and adds it’s only touches with amusing characters.

The story starts with a glimpse of a teen being murdered in the 70’s by a mysterious killer. The film then fast-forwards to 1984. A group of kids get together following a dance and head to a cabin for a  party, when their bus breaks down near the original murder took place. Meanwhile, the killer had taken his home back from the current resident of the house, creating the worst situation possible for the teens. When they take refuge in the empty house and begin to discover the secrets of the owner, things take a creepy turn.

Considering the fact that this is a throw-back slasher, the acting is great. Robert Patrick gives an amusing performance as Mr. C. Elise Gatien gives is outstanding as terrified teen Jamie.  From 80’s style music, to big hair, the film captures the styles and charm of the era. The technology limitations of the time are played up with a few seconds of “missing reel”. A good amount of gore, along with a mix of classic style slasher kills with creative new ones, make this horror flick an entertaining way to spend a Saturday night for any horror fan!