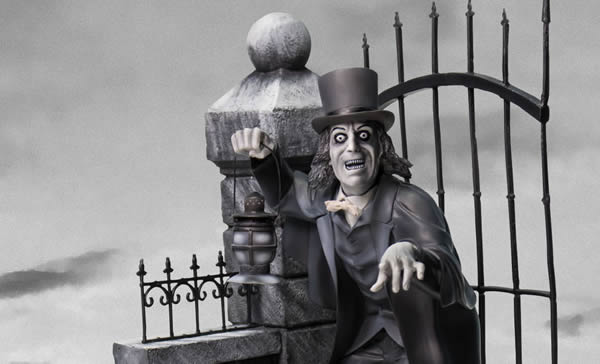 An incredible “Man in the Beaver Hat” from London After Midnight limited-edition statue is coming soon from Sideshow Toys. Check out the official info and pic below.

All is not well at the Balfour estate. It has been five years since the terrible incident, and the home has stood empty ever since that tragic day. Now, strange inhabitants have been seen creeping around the property at night. What ill fate will befall those who dare to be caught out after midnight?

Quarantine Studio and Chaney Entertainment proudly present Lon Chaney Sr. as The Man in the Beaver Hat from the long lost classic film, London After Midnight. This is perhaps one of Chaney’s most talked about films and is assuredly his most iconic character makeup.

This 1/6th scale limited edition statue, fully licensed by Chaney Entertainment, was meticulously sculpted by Jeff Yagher. Every detail from the prosthetic makeup around the eyes and mouth to the creases in his perfectly posed fingers is faithfully recreated. The likeness to Lon Chaney Sr. is second to none. This deluxe edition includes a wall and gate environment base. Cast in high-quality polystone resin and finished in a classic black and white paint job, this statue is the ultimate tribute to the man who brought this memorable character to life.