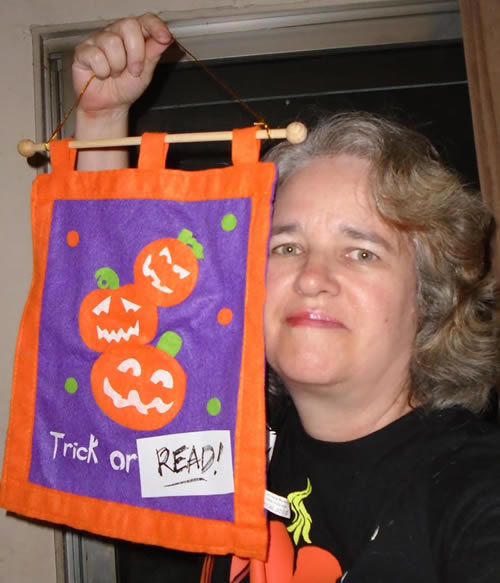 To talk horror writing, the name Lisa Morton is at the top of everyone list including readers, fans, peers, critics and what goes bump in the night! A six time “Bram Stoker Award” winner as well as a recipient of the “Black Quill Award” and a winner of the 2012 Grand Prize from the “Halloween Book Festival”! Lisa started her career as a screenwriter and has completed dozens stories for anthologies, magazines and collections over her distinctive career as well as being a celebrated non-fiction writer with nearly 40 book credits to her name (look them up on http://amazon.com). A legend in the field, a mentor to many, an authority on Halloween and one of the celebrated voices talking about this years “Stokercon” coming up May 12-15 with me Jay Kay. We were lucky enough to grab Lisa for a few minutes to chat about this event and the impact it has.

Horror News Network: Thank you for taking the time Lisa especially as we approach “Stokercon 2016” thisMay 12-15, 2016 at THE FLAMINGO HOTEL in LAS VEGAS. First, talk about this event and how it came together?

Lisa Morton: Sure, Jay, and thanks for letting me jabber! StokerCon 2016 marks the debut of what we hope will be an annual event for the Horror Writers Association. For years, we’ve presented our iconic Bram Stoker Awards as either part of the World Horror Convention, or as a relatively small weekend gathering. However, over the last few years HWA’s membership has expanded dramatically, and we’ve heard from members all over the world who wanted to see the presentation of the awards at the center of a full convention. We agreed, and started working on the convention about two years ago. We had two members – Rena Mason and R.J. Cavender – who volunteered to chair the convention in Las Vegas, and that was such a no-brainer destination it was all but a done deal.

Horror News Network: “Stokercon 2016” is put on by the “Horror Writers Association” which offers so many opportunities for authors and writers resources in writing, publishing, editing, scholarships, promotion, education, readings and more around the world. What does this organization mean to the world of horror writing and dark literature? How has the organization grown in more than 30 years of its existence?

Lisa Morton: HWA was formed in the mid-’80s (by authors Joe Lansdale and Robert McCammon, and Karen Lansdale) when horror was booming, and although mystery writers, science fiction writers, and romance writers all had their own organization, horror authors didn’t. When the bottom fell out of the boom in the ’90s, HWA was there to continue to promote the genre and provide sales opportunities and even hardship loans to its members. Now, in the second decade of the 21st century, horror is on the upswing again, our membership numbers are rising every year, and we see a golden opportunity to both strengthen the horror genre’s position in publishing and educate the public on the genre’s literary history.

Horror News Network: As a part of “Stokercon 2016”, the convention will open the “Horror University”. This will offer master style workshops with legends in the field of dark fiction and horror storytelling. How did this collaboration come to be and what opportunities does this entity offer to those attending? Also, talk about the importance of the “pitch sessions”?

Lisa Morton: In 2015, HWA ran the World Horror Convention in Atlanta, and during that convention one of the things we heard from a lot of authors was, “Ya’know, I go to other conventions and to universities and to writing retreats and camps where I offer this workshop – wouldn’t it be cool if I could do that at StokerCon?” We started to realize we had so many fantastic workshops coming our way that it looked like a whole “Horror University”, and the name was born! We think Horror University has something for all writers, from beginners looking for way to enhance their craft and break into the business, to established pros who might be looking for refreshers or opportunities in other areas of writing, like poetry or screenplays.

Lisa Morton: I love all of the categories! Anthology is our only category that doesn’t recognize a writer – it recognizes an editor, which I think is great because editors have been so crucial to shaping the direction of the horror genre. Screenplay is fabulous because horror has such an interaction between literature and film – a great horror movie can impact the literary side of the genre. And graphic novel recognizes an area of publishing that has grown exponentially in popularity over the last ten years, so I’m glad we can move forward with the times.

Horror News Network: Talk about the fiction and adult categories this year and the top honor in Superior Achievement in a Novel and First Novel? What does the young adult category represent for the next generation of dark fiction and horror writers?

Lisa Morton: We consider the Novel category to be our version of “Best Picture”, so it’s always an exciting category. First Novel brings the most promising new writers to the attention of the reading public. Young adult, like graphic novel, is another field that has become immensely popular since the start of the millennium, and we’re thrilled to be able to recognize the incredible works of young adult authors.

Horror News Network: Looking at the ballot, I notice several smaller presses getting nominations for their authors and written works. The growth of these digital and smaller presses continues to change the market I would think. Having them on the ballot, what does it mean to the evolution and growth of “Stokercon”, “Horror Writers Association” and the “Horror University”?

Lisa Morton: Small presses have almost always been vitally important to the horror genre – I think back to, for example, Arkham House, which started in 1939. The Bram Stoker Awards have always recognized works published by both major houses and by small presses, and now we also recognize works by indie authors, who haven’t worked with a publisher at all. It’s all about promoting excellent works to the world, and as such we don’t really care where that work comes from.

Horror News Network: Talk about the diversity within horror writing with this year’s group of “Guests of Honor”? You focus on straight up horror fiction (Ellen Datlow, Leslie S. Klinger,and Jack Ketchum), television (Daniel Knauf), poetry (Marge Simon), children and young adult fiction (R.L. Stine), horror magazines like “Fangoria” (Tony Timpone), online review sites like “Blumhouse” (Ryan Turek) and legends like Anne Serling. How did those involved decide on this selections for “Guests of Honor”? Ketchum was my first recorded guest on “The Horror Happens Radio Show”, what does he mean to HWA?

Lisa Morton: I’m glad you noticed that diversity! I’d also add that we wanted Leslie S. Klinger because his superb annotated editions (like his Dracula and Lovecraft books) represent horror’s non-fiction side. Also, our Toastmaster, Stephen Jones, is British; we want to recognize horror from all over the world, and hope to always include Guests in our events who come from outside the U.S.

Jack Ketchum was one of our first ideas for a Guest. He is a multiple Bram Stoker Award winner whose work includes modern classics like The Girl Next Door and The Lost, he’s recently been behind several excellent films (like Red and The Woman), and he is one of the most recent recipients of HWA’s Lifetime Achievement Award.

Horror News Network: There are six honors and awards this year including ones like The Bram Stoker Awards, Lifetime Achievement Awards, Specialty Press Award, Richard Laymon Award, Silver Hammer Award&Mentor of the Year. They are all amazing honors just like the categories for the Stokers but which one do you look forward to most this year and why?

Lisa Morton: Well, it’s hard to imagine anything more amazing than the Lifetime Achievement Awards, and this year’s recipients – Alan Moore and George A. Romero – happen to be my favorite graphic novelist and one of my favorite directors, so I really love those choices.

Horror News Network: How much work and goes into setting up a convention like this? Any highlights to this years’ schedule? Also, talk about the “Lucky 13 Horror Short Film Competition” as a part of the convention?

Lisa Morton: Well, as I mentioned above, we’ve been working on this event for about two years. It starts with arranging a venue, and that proved to be unexpectedly difficult with this one – we found out that Vegas really wasn’t designed for events that were bigger than wedding receptions but smaller than major media trade shows. We spent six months going through nearly every hotel in Vegas, and in fact we were talking about moving to Reno when The Flamingo came through (with exactly ONE open time slot!). We’ve also been working on 2017 for at least a year.

I have to credit R.J. Cavender with the idea for the Lucky Th1rt3en competition. When he first mentioned the possibility, we all kind of went, “Wellllllll…maybe…” But the more we talked about it and thought it through, the more we realized this was one more event that would both set StokerCon apart and reaffirm our interest in the genre’s cinematic side.

Horror News Network: Finally, how has social media and the city of Las Vegas played into the planning and success of “Stokercon 2016”?

Lisa Morton: Social media has served as both a principal avenue of publicity and information dissemination for us; in the past, conventions had to send out periodic Progress Reports to let their members know about updates to the convention, but now we just announce it on Facebook! It also provides a wonderful way to interact with attendees, and we’ve gotten some great feedback and suggestions via our Facebook presence.

As of this writing, we’re still investigating some ways to use the city of Las Vegas – for example, we’d like to promote Horror University to some of the local schools. As usual with these things, we wish we’d had more time to work with the local community, but somehow there’s never quite enough time or volunteers for everything we’d like to do!

Horror News Network: Tremendous Lisa, thank you so much! Find out more about Lisa Morton at http://lisamorton.com For those who live the deadly and powerful written word in horror, head over to http://horror.org/awards/stokers.htm for more information on the “Horror Writers Association” and the “Stoker Awards”.