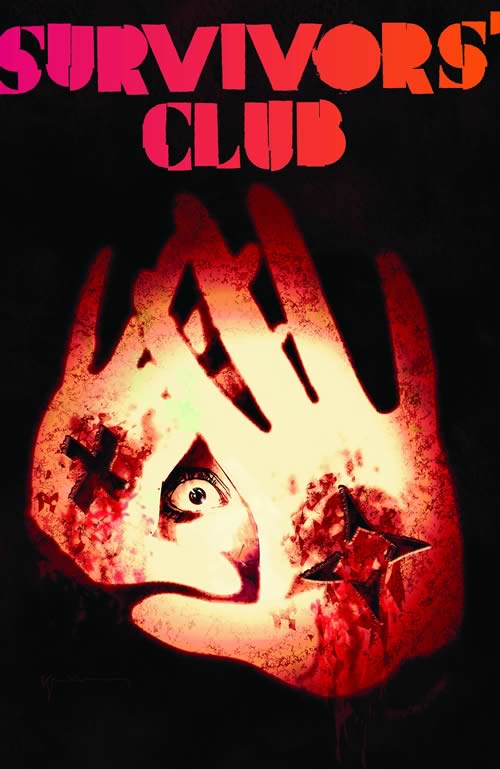 One was possessed by a poltergeist. Another was trapped in a haunted house. A third had a killer doll. Ever wonder what happened to these children of the 1980s? Find out in SURVIVORS CLUB, a new series cowritten by renowned horror novelist Lauren Beukes and award-winning cover designer and illustrator Dale Halvorsen, with art by Ryan Kelly (NORTHLANDERS).

Having found each other over the internet, six grown-up survivors are drawn together by the horrors they experienced in 1987 when a rash of occult events occurred around the world-with fatal results. Now, there are indications that it may be happening all over again. Is it possible that these six aren’t just survivors-but were chosen for their fates?

We caught up with series co-writers, Lauren Beukes and Dale Halvorsen to talk about “Survivors Club.”

Horror News Network: How did the concept for this title come about?

Lauren Beukes & Dale Halvorsen: Dale was watching Child’s Play and started wondering about what happens to the protagonists from horror films after the credits roll and how much that experience would mess you up. He pitched Lauren the idea and she took it straight to Shelly Bond at Vertigo: What if the 80s horror movies were real and where are those kids today?

Horror News Network: Can you tell us a bit about each of the main characters in the series?

Lauren Beukes & Dale Halvorsen: Chenzira is the Indiana Jones of video gaming, seeking out a lost arcade artifact she encountered as a kid in Johannesburg, South Africa.

Simon is a Z-list celebrity on the horror circuit, the real-life survivor of a haunted house possession that has been turned into a mega movie franchise.

Alice is the heiress whose parents died mysteriously when she was five years old. She blamed it on her dolly.

Kiri is a process server who still carries the curse she brought with her from Japan and the school where children were disappearing.

Teo has a weird mark on his neck and uses his job as a paramedic to watch for any signs of another outbreak.

Harvey… well. People have a habit of dying around Harvey. Starting with his babysitter when he was six years old.

Horror News Network: What is happening now in the world that draws these survivors together?

Lauren Beukes & Dale Halvorsen: Chenzira is convinced that the video game she played as a kid in Soweto, which opened up a gateway to hell, is back. She’s been watching for the signs and in digging around, she discovered all the survivors’ names on a list in a murky corner of the Dark Web. She knows they’re connected, that they all had something bad happen to them when them were kids in 1987, but she doesn’t realize that bringing them all together is probably the worst thing she could have done.

Horror News Network: What can readers expect from this title when it comes to the scare factor?

Lauren Beukes & Dale Halvorsen: We want to twist horror tropes you’ve seen before in weird and interesting ways. We’re both huge horror fans (as an aside, best horror comics we’d recommend: anything by Junji Ito, Locke & Key by Joe Hill and Gabriel Rodriguez, Ed Brubaker and Sean Philips’ Fatale and Through The Woods by Emily Carroll). We think a lot about what makes things scary and if we manage to freak each other out, we know we’re on the right track. It’s about feeling something for the characters. We’re playing with all the horror genres in one comic. Over the course of the series we’ll touch on body horror, slasher (although neither of us find torture porn particularly scary – so we’ve found other ways to ramp this up), J-horror, haunted houses, demonic video games, possession, sex, insects, evil twins, scary dolls. Our guiding principle is that we want to pull the rug out from under your feet – and when you look down you realize the rug is made from human hair and skin… and those aren’t your feet.

Horror News Network: What makes Vertigo the perfect publisher for this title?

Lauren Beukes & Dale Halvorsen: Shelly Bond! Our brilliant editor who pushes us to do our best work and the creative team OF AWESOME she’s assembled.

Horror News Network: Can you talk a bit about Ryan Kelly’s artwork on this series?

Lauren Beukes & Dale Halvorsen: Ryan blows us away every issue. We love the cinematography he brings to the page, the emotional gut punches that provide a twisted empathy for even the most horrifying of the characters. He can do brutal and subtle horror, which is a real talent. His art is beautiful and gritty and unexpected – often he interprets the words in a way we couldn’t have anticipated and it’s always better than we could have imagined. His flashback sequences in ink wash are devastatingly gorgeous.

Horror News Network: Tell us a bit about the rest of the creative team on Survivors’ Club.

Lauren Beukes & Dale Halvorsen: Eva De La Cruz’s colors set the mood, like grading on a film. She’s gone with a slightly muted palate and it works so well to create the tone and is the perfect complement to Ryan’s artwork. Clem Robins is our letterer, and it is amazing how important it is determining where the words go for maximum impact. Lettering is, in a very real way, pacing. Rowena Yow is our associate editor, who has brilliant insights into our plot and the characters and is on hand to explain Star Trek references and video game jokes to Shelly! We’re very lucky to have the legendary Bill Sienkiewicz doing the creeptastic covers and Inaki Miranda (who Lauren worked with on Fairest: The Hidden Kingdom) is doing guest issues, starting with issue 4.

Horror News Network: Is this an ongoing title or a mini-series?

Lauren Beukes & Dale Halvorsen: It’s an ongoing series with smaller mysteries to be solved along the way that will reveal each of the characters’ own personal horrors and a grand over-arcing story we’ve plotted very carefully that explores exactly how they’re all tied together and why this is probably a Very. Bad. Thing.

Horror News Network: In closing, what would you like to say to our readers about Survivors’ Club?

Lauren Beukes & Dale Halvorsen: There will be scares and surprises and emotional hooks and a lot of rug-pulling. If you enjoyed Cabin In The Woods, we think you’ll like this. Pre-order it with your local comic shop.

Horror News Network: Thanks for your time, guys! Best of luck with this series.