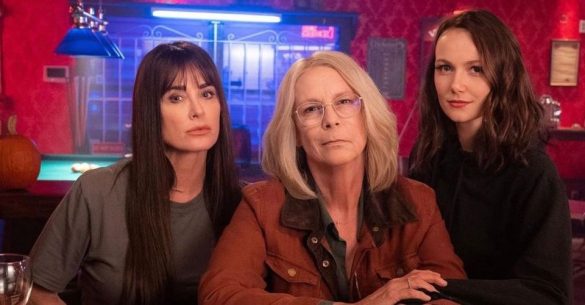 Ladies’ Night Out In Group Shot From ‘Halloween Ends’

It’s almost last call for Laurie Strode and her posse.

Halloween Ends is now filming in Georgia, and the three females leads look ready for the final countdown, if the most recent publicity still can be believed. Check out the photo of the confident trio hanging out at a cozy Haddonfield watering hole–courtesy of screenrant.com–on this page.

In the pic from producer Jason Blum, Jamie Lee Curtis as Strode is seen flanked by Andi Matichak as her granddaughter Allyson and Kyle Richards as Lindsey Wallace. The three survivors will, no doubt, be looking to end Michael Myers’ reign of terror in the next installment of the franchise, slated to hit theaters Oct. 14.

Richards, who played Wallace in the original Halloween, reprised her role in last year’s Halloween Kills, but didn’t share screen time with Curtis. From the looks of this photo, that may change in Halloween Ends.

“The last movie, I saw Jamie on the set, but we didn’t have stuff together,” Richards said. “So, I’m really hoping there is more stuff together. I can’t talk about any storylines, but I’m so exited to return with Jamie and (director) David Gordon Green.”

Little is known so far about this (reportedly) final Halloween film, but Green has said it will be set four years after Halloween Kills. “I would say that Halloween Ends is a more intimate movie where we were able to curate some of the aftermath of the chaos,” Green said. “In a lot of ways, it’s a coming-of-age story.”

Halloween Ends–which will likely be Curtis’ curtain call in the Laurie Strode persona–is helmed by Green from a screenplay he wrote with Danny McBride, Paul Brad Logan and Chris Bernier.