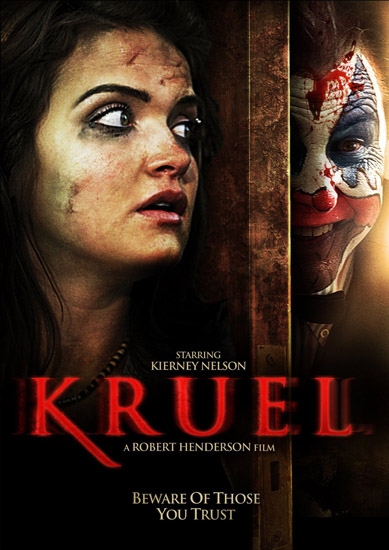 Synopsis: ‘Kruel’ – is a horror/thriller feature length movie about a psychotic killer who masquerades as an ice cream man in order to get closer to the objects of his affection.

Our Thoughts: ‘Kruel’ centers around a college girl who is stalked by a creepy ice cream man, who is the last person that should be around children.

The first half of the film burns slowly. When Jo breaks up with her cheating boyfriend, a child she’s babysitting goes missing. Her ex immediately suspects a man he had seen in the area who appeared to be fishing, when he clearly wasn’t. Jo starts to think it might be the ice cream man, Willie, that scared the child before he went missing.

The film picks up when Jo and her ex break into Willie’s house, where they find a series of creepy and disturbing toys, which set off an alarm alerting him to their presence. Later, he attempts to abduct her off the street in broad daylight. As Willie ups his game, the film becomes more intense.

I didn’t expect the end to go down the way it did. I really liked the violent aspects of the ending, however the final note wasn’t my cup of tea.

The film focuses on the drama and life of Jo more than I would have liked. The scares were subdued a bit more than other horror, and I found Willie to be more terrifying with his face paint on, than without, as he spends most of the film. Kierney Nelson is excellent as confused and terrified Jo. I honestly had a hard time believing that this is her first film.

Overall, the film has a decent story with a likable lead character by an actress who gives a great performance. Fans of serial killer flicks will want to check it out.