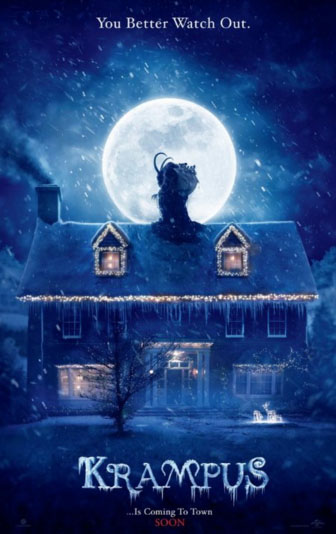 Synopsis: A boy who has a bad Christmas ends up accidentally summoning a Christmas demon to his family home.

Our Thoughts: ‘Krampus’ is the best holiday horror comedy to watch this season, with a creative take on the Krampus mythology from horror director Michael Dougherty.

When a family holiday get together goes bad, and everyone is at each others throats, the Christmas spirit is literally thrown out the window, as child Max throws his list to Santa into the wind.

Unlike most horror films, we get quite a bit of character development for the first half hour, up until Krampus’s storm comes to town. With the arrival of a blizzard, a creepy mystery snowman and a strange sack of presents, horror ensues as Krampus and his helpers come to punish those who have lost hope in Christmas spirit.

Dougherty puts many of his own touches on the mythology, with the addition of demonic toys and helpers that come after the family. While the animation used in the film were slick, the practical effect were much stronger and more effective at scaring the audience. I particularly enjoyed the jack-in-the-box who swallows up one of the kids.

With a PG-13 rating, it is a scary holiday horror flick that the whole family can watch. While this is a plus in terms of a family movie to watch, it is a loss on the horror side. The scariest scenes in the film are cut away and what could have easily been a much more violent gorefest, is instead toned down to be more suitable for a wider audience.

Aside from wishing the film was rated R, my only other complaint is that we don’t see as much of Krampus as we could. While I did like his demonic helpers, some of them there were clearly more there for comedy than horror. They were funny but I would have liked to see Krampus doing more of the punishing.

Adam Scott and Toni Collette are excellent as frustrated parents Tom and Sarah. David Koechner  is hilarious as red neck in-law Howard. Krista Stadler is sympathetic as grandmother Omi and Emjay Anthony is prefect in the role of regretful child Max. ‘Krampus’ is the must see horror flick this winter and I recommend it to all holiday horror fans and their families. It’s a film you will want to watch year after year in your Christmas horror rotation!