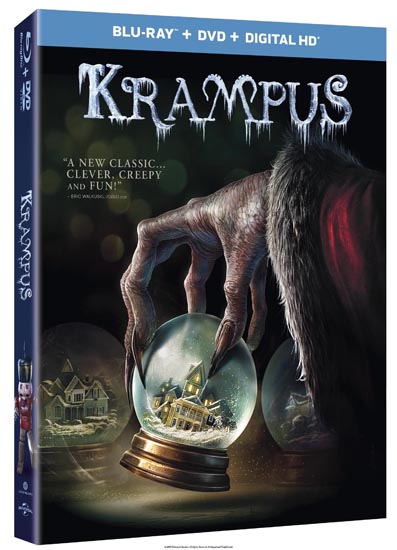 FROM THE WRITER AND DIRECTOR OF TRICK ‘R TREAT

Universal City, California, February 23, 2016 – An ancient demonic avenger lays siege to an unsuspecting family in Krampus, a truly terrifying, darkly comedic tale coming to Digital HD on April 12, 2016, and Blu-ray™ Combo Pack, DVD and On Demand on April 26, 2016, from Universal Pictures Home Entertainment. From Michael Dougherty (writer and director of cult horror favorite Trick ’r Treat, writer of X-Men: Apocalypse), Krampus  is “a must see film” (We Got This Covered) that delivers inventively nasty laughs as it plunges viewers into a nightmarish world ruled by a legendary monster bent on total destruction, punishing those who have lost faith. Krampus on Blu-ray™, DVD, and Digital HD also comes with exclusive bonus features including an alternate ending, deleted scenes, gag reel and extended scenes.

When his dysfunctional family clashes over the holidays, young Max (Emjay Anthony) is disillusioned and turns his back on Christmas. Little does he know, this lack of festive spirit has unleashed the wrath of Krampus: a demonic force of ancient evil intent on punishing non-believers. All hell breaks loose as beloved holiday icons take on a monstrous life of their own, laying siege to the fractured family’s home and forcing them to fight for each other if they hope to survive.

The Naughty Ones: Meet The Cast – At the center of this crazed story, filled with horrifying creatures and massive set pieces, are some of the funniest and most talented actors working today.  This piece shines a light on the cast of Krampus as they share their experiences making this movie.

Galleries – Still Images from the set

Krampus and His Minions – In this exclusive feature see how Krampus and his twisted underlings gave the visual-effects superstars at Peter Jackson’s New Zealand-based Weta Workshop some creative and technical challenges. Viewers will have an insider look at how Krampus and his evil minions were created and executed.

Practical Danger – Stunt Coordinator Rodney Cook walks viewers through how the film’s thrilling stunts were done live on set while facing challenges with the creatures, children and set design.

Inside the Snowglobe: Production Design – Filming almost entirely on sound stages in the middle of summer in New Zealand, the art department and special effects team had to pull out all of their tricks to create sets that were realistic, ready for stunts and practical effects, all while creating the look of a winter wonderland.

Behind the Scenes at Weta Workshop: Krampus – Go behind-the-scenes at the world famous Weta Workshop to see how they brought the amazing Krampus creatures to life.

Dougherty’s Vision – In this featurette Director Michael Dougherty, along with the film’s cast and crew, reveal how his approach informed the tone, pacing, humor and performances of Krampus.

Blu-ray™ unleashes the power of your HDTV and is the best way to watch movies at home; featuring 6X the picture resolution of DVD, exclusive extras and theater-quality surround sound.

DVD offers the flexibility and convenience of playing movies in more places, both at home and away.