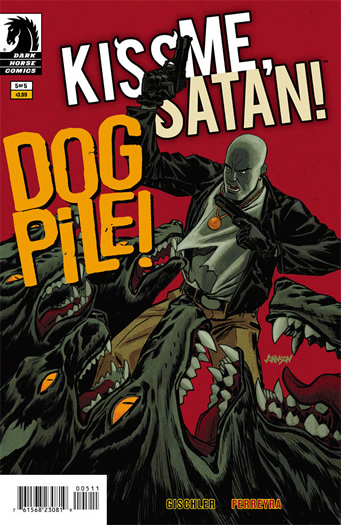 Horror News Network’s Christine Caprilozzi recently caught up with Victor Gischler to talk about Kiss Me Satan n the grande finale, and his move to the darkside of comics.

Horror News Network: “Kiss Me Satan” has been an amazing series, but sort of took horror comic fans by surprise. You’ve worked a lot outside the genre.  What brought you over to the dark side?

Victor Gischler: Thanks!  I was told to get into horror because that’s where the money is. LIES!  WHY DO PEOPLE LIE?!  Seriously, I’m not totally unfamiliar with dark stuff.  The protagonist of my first novel GUN MONKEYS was a pretty rough guy and I’ve done some Noir work which can get dark or at least dark-ish. I’ve always liked the play things of horror.  Zombies and witches and werewolves, etc.  So when I set out to write something like KISS ME, SATAN I’m not really thinking “How can I frighten people?” I’m just thinking I really like those horror toys.  KMS has some genuinely good horror moments, but I think “Pulp Action B Movie” is more the sort of mind frame that drives me.

Horror News Network: The main character Barnabus is a bit of a complex character.  How did you go about his character development?

Victor Gischler: My grandmother was very religious, so I hear lots of Bible stories growing up, including the story of Lucifer being cast out of Heaven.  The character of Barnabus really stemmed from this one thought: When Lucifer was cast out of Heaven, he took a third of the angels with him … only one wanted to return.

Horror News Network: Barnabus has had quite the journey in this series.  When you first began writing, did you know how it was going to end?  Did you ever envision how Juan Ferreya portrayed your ending?

Victor Gischler: I am not a fan over overly detailed outlines (editors have yelled at me for this) but I do like to know key points and scenes.  I want to know how it starts, how it ends and some of the key turning points in between.  As for Juan … well the man is a genius.  He turned some of those final pages into some really gorgeous high octane big budget film stuff.  Here is how conversations about KISS ME, SATAN will go five years from now:

“Yeah, he’s awesome.  I buy everything he draws.”

“Who wrote that book?”

Horror News Network: This isn’t just a “witch” story or “werewolf” story, etc.   You sort of capture this entire demonic world, which is a huge undertaking to do, and do it well.  The “werewolf mafia” atmosphere was fantastic. What was the inspiration for that? And did it feel like it was a bit overwhelming to try to do this all encompassing story justice?

Victor Gischler: I very much wanted to world build.  When KMS was announced, I saw a few different people on the internet saying things like “Really?  Werewolves vs. Vampires?  Again?”  WHAT?!  Who said that?  I never said that!  No, what I wanted to do was strongly establish that this is a world populated by such things.  So yeah, maybe werewolves and vampires are fighting three blocks over or across town … because this is a world that has those creatures … but that’s not what we’re concerned with today.

Horror News Network: Juan Ferreyra does an amazing job with the artwork.  How did you start working with him? and what was the creative process like?

Victor Gischler: I was working with Dan Chabon on finding an artist because we were having a bit of trouble getting an artist lined up. Dan sent me some samples from Colder and I liked them right away.  And KMS has turned out even better than I’d ever imagined.

Horror News Network: **No Spoilers, but “Kiss Me Satan” #5 is a just a nonstop, in your face, demonpalooza..an absolutely flawless ending. What are your thoughts on how it all culminates?

Victor Gischler: That’s high praise and I thank you again.  ARE YOU LISTENING, HOLLYWOOD?  Really, I wanted an ending that was perfectly satisfying and complete (enough) that if we never visited this world again, it would still work well as an ending.   But I also wanted to leave the door open, ya know?  Maybe still a few questions that could be answered if we came back for another visit.

Horror News Network: Do you think we’ll ever see Barnabus again, or a continuation of his journey?

Victor Gischler: Ah!  All along when writing KMS I had in mind that we could see more.  Nothing guaranteed, but I wanted that maybe in there.

Horror News Network: What’s up next for you?

Victor Gischler: Amazon’s 47North imprint is currently serializing my fantasy novel INK MAGE.  So I’m anxiously hoping the book does well enough for a sequel.  I’m also the ANGEL & FAITH writer for the upcoming Season 10, so that’s keeping me busy.  And I’ve always got a few things brewing in the secret basement …