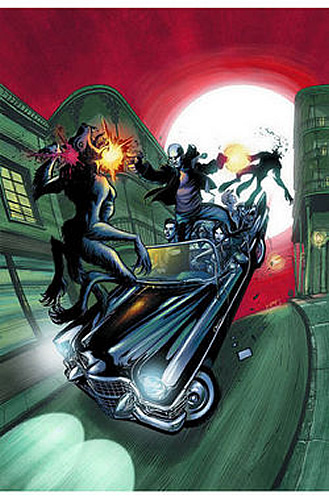 Synopsis: Cassian Steele is the boss of the werewolf mafia in the Big Easy, and he’s got a problem. The old witch Verona knows his secret and has gone into hiding. Cassian wants her dead. So he sends out the word: An open contract. The first monster to dust Verona gets a big payday. What no one realizes is that Barnabus Black, a demon desperately trying to regain his halo, is her protection.

Our Thoughts: In this first issue of “Kiss me Satan” Victor Gischler cooks up an intriguing and bloody fantastic stew of witches and werewolves. The book opens with Barnabus Black being hunted down, however, the reader has no idea why.  The issue unfolds the back story to the mayhem, which I will not reveal completely here.  There’s a huge amount of action in the story, and many layers of intrigue to the plot.  There a lot of comics that try to mix up demons within a comic, but many don’t hit the mark.  Gischler definitely sets the stage in a way that very much makes sense and delivers the goods.

With that said, Juan Ferrera, who previously showed some masterful skills on “Colder,” lends his talents well here.  With some intense battles already in the first issue of “Kiss Me Satan,” Ferrara’s work definitely doesn’t disappoint.  Bloody, graphic, and gory, horror fans will also feel satisfied as he does the werewolf battle scenes justice.

I must admit, I was a bit skeptical going into this issue, as only a handful of creators seem to execute the “werewolf” comic in the gritty and terrifying way horror fans love.  Gischler not only gets it right with the story, adding depth and “meat” around it, but also shot well beyond this comic fan’s expectations. Juan Ferrera’s artwork also adds tremendously to the action and is some brutally sweet frosting on the cake.  If you like horror comics, “Kiss Me Satan” is one to definitely one to check out on September 18th.