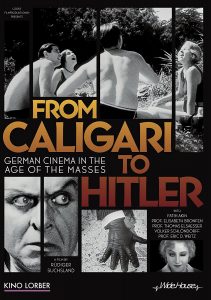 If you’re a fan of horror movie history like me, you must have loved it when Universal Studios released their feature-length Universal Horror documentary in 1998 with their DVD release of Frankenstein. Featuring narration by Kenneth Branagh and appearances by Forrest Ackerman, Ray Bradbury, film historian David Skal, and numerous others, the film explored the context and implications of the origins of American horror movies. While I loved the star power of the documentary, my favorite parts of the film were the clips where Skal explained the impact of German gothic horror films on Hollywood at the time. He further commented on some of the more challenging scenes of films like 1922’s J’accuse and 1932’s Island of Lost Souls, and theorized their conscious and subconscious connections to world issues surrounding World War I and World War II. If you are interested in this kind of academic approach to the exploration of early filmmaking, Rüdiger Suchsland’s From Caligari to Hitler: German Cinema in the Age of the Masses is for you!

From Caligari to Hitler debuted in Germany in 2014, and Kino Lorber will make the film available to American audiences for the first time ever on DVD with English subtitles on 1/9/18. Featuring appearances by prominent German and American film critics, historians, and professors, the documentary explores the themes, motifs and imagery of German films produced between 1918-1933 under the Weimar Republic and analyzes their significance to the factors which led Germany to its infamous Nazi dictatorship from 1933-1945. The film is based on  Siegfried Kracauer’s 1947 thesis of the same name, and the majority of its scenes are a visual examination of Kracauer’s ideas. Like many of the famous actors and directors covered in the documentary, Kracauer actually escaped Germany during the rise of Nazism and continued his academic work while seeking refuge in America.

Although the film’s title directly names Adolf Hitler, the movie largely avoids any direct analysis of the man himself. In fact, it follows a chronological analysis of film which barely approaches the economic collapse of Black Friday, 10/24/29, which marked the beginning of the great economic depression that gave rise to the Nazi takeover. The films of the Weimar Republic represent a very different Germany from what it would become in just a few short years, but this documentary shows the warning signs which were hidden in plain view in some of the most cutting-edge examples of everything from expressionism to mundane realism.

From Caligari to Hitler is its strongest when it explores the most famous horror films of the period. It spends an extended portion of screentime examining such classics as Fritz Lang’s M, Metropolis, and Dr. Mabuse the Gambler, F.W. Murnau’s Nosferatu, Robert Wiene’s The Cabinet of Dr. Caligari,  and Carl Boese’s The Golem. As each film is explored, we begin to see a troubling emergence of themes: recurring shots of powerful hands gripping maps- exerting dominance and control, “seductive magicians,” and “blonde German superman” archetypes who overcome adversity with brute force. To give you a clearer idea of how the documentary presents its ideas, I’ll share more on what it has to say about Caligari. Essentially, Kracauer observes that Caligari depicts, “the decay of values and of order” and it presents ideas, “about valuation and identity not being valid anymore.” Kracauer’s conclusion is that The Cabinet of Dr. Caligari represents, “a subconscious anticipation of fascism, with Caligari as tyrant and society as losing its sanity.” Obviously, that tyrant would take a human shape in the form of Adolf Hitler, but From Caligari to Hitler focuses on the source films at hand, and largely leaves the direct connections up to the viewer. 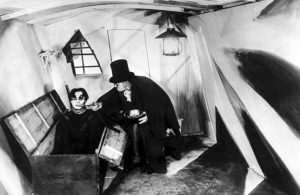 Each time From Caligari to Hitler moves on to another prominent example of early German filmmaking, the motifs become more clear. It’s one thing for Caligari to be chock full of coincidences, but it’s another thing entirely when film after film projects, “Manipulators and magicians, omniscient and omnipotent,” and, “aspiring world rulers with infectious seductive powers.” Sound familiar? Even more interesting is the way in which these early films demonstrate these charismatic ruler’s control over the people, as population after population are characterized as being, “somnambulist, possessed, only too willing to carry out their masters’ orders.”

When the documentary does examine German history, it chooses to focus entirely on the events leading up to World War II. There are no direct examinations of Hitler or his rule over Germany. Instead, the film explores a post-World War I Germany, which it describes as a, “deeply unsettled society trying to find its own identity.” The film cites the 1919 movie, Nerven, which chillingly recreates the revolts in Munich. It highlights examples of Weimar filmmaking focusing on strong portrayals of Prussia, representing the society’s subconscious desire to, “return to order,” under “authoritarian rule.”

Interestingly, this is exactly where From Caligari to Hitler begins to make a couple of stretches which aren’t as clearly constructed as its ideas about the earlier, more famous examples of German expressionism. When the documentary explores the mundane, realistic films of the 30’s, there isn’t much for the viewer to do except marvel that these warm depictions of the young people of Germany are exact shots of people who would be adults during the heinous events of World War II. While I personally found the film’s examination of People on Sunday to be interesting, it didn’t exactly maintain the thread of the much stronger examples provided earlier in the documentary. Suchsland himself describes the film as a, “feast of the casual… people living in a postwar era, which is not aware it is also a prewar era.”

Oddly enough, as things begin to look more and more casual and normal on film as we chronologically near the rise of Nazism in From Caligari to Hitler. What began as an examination of classic horror films shifts its focus on later films featuring young people hanging out on the beach and rousing musicals. Although the landscape had changed and expressionism wasn’t the only method of storytelling on the block, the troubling motifs of yesteryear continue to emerge. In the great musicals of the time, we see men in uniform marching to music in a synchronized fashion (The Three from the Filling Station). We see grand scenes filled with masses of human beings dancing in unison, more easily identified as a group than as a gathering of individuals. As the documentary describes it, the humans are merely “ornamental” in how they are portrayed in their relation to the group. Although the later films are generally more cheerful, they clearly represent society’s eagerness to shed its individuality and join a group. Couple that with the other film’s portrayal of strong authoritarian rule, and you can see how the two types of filmmaking presented the full picture of what was going on in Germany at the time. 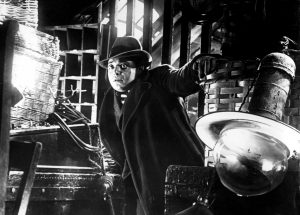 From Caligari to Hitler concludes by examining Fritz Lang’s works created just before he fled Germany to America. In M, which was released just two years before the founding of Nazi Germany, the narrator observes that by the end of the movie, “the more effective police (in the film) are the gangsters. This efficiency is accompanied by latent, unscrupulous brutality.” In Lang’s final Dr. Mabuse film, which was ultimately banned in Nazi Germany, “psychopaths and criminals took over,” eerily mirroring the regime of its time.

It is a fact that film is often a reflection of the time period in which it is produced. While the connections between the titles covered by the documentary and the rise of Nazi Germany are profound, the thesis of From Caligari to Hitler should not come as a surprise. It is well-researched and painstakingly documented, and its focus on Kracauer’s original ideas lend additional authenticity to the work. From Caligari to Hitler expertly presents the study of the filmmakers of the time by a scholar of the time to present an era and location he knew all too well.

The movie concludes with a massive scrolling list of actors and directors who ultimately fled Germany and continued their work in America, and the moment drives home the grave consequences of the unspeakable horrors which were just on the horizon in German history. Even a preliminary viewing of From Caligari to Hitler is enough to give viewers a lot to think about when examining the earliest films of horror history, and is an important addition to any serious horror aficionado’s collection.

Because From Caligari to Hitler primarily presents clips from old movies- many of which are nearly 100 years old- picture quality isn’t exactly a major selling point for this release. The purpose of this documentary is to deliver information and analysis, and Kino’s DVD does this just fine. The disc doesn’t offer any bonus features beyond a trailer for the documentary, but the movie’s 2-hour runtime means there isn’t much else to cover in the scope of the thesis.

Despite some parts which I found to be unessential to its thesis, From Caligari to Hitler is a strong and academic exploration of the context of some of Germany’s most famous horror films. It is an interesting and accessible film, even when it is presenting complex issues; and it is a comprehensive example of the significance of the ways in which movies capture, explore, and predict our culture as a whole.