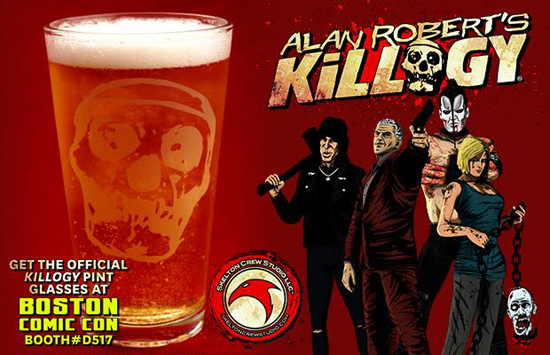 New York, NY = Skelton Crew Studio, the sculpting house responsible for creating an array of high-end, limited edition replicas based on award-winning comics properties such as Locke &Key, Hellboy and CHEW, is excited to announce a new partnership with acclaimed comics creator and two time Horror Comic Award winner, Alan Robert to produce an exclusive line of collectables based on his hit comic Killogy (IDW Publishing).

The first products from the collection will make their debut at Boston Comic Con, July 31 – August 2, 2015. Two 16 oz. etched Killogy Pint Glasses will be available for purchase at Skelton Crew Studio’s booth (D517), retailing at $10.99 each. One design features the voodoo artwork found in the comic, circled by an ominous warning of the impending apocalypse, and the other displays a bold Killogy skull logo. Each glass comes complete with a full-color, double-sided “Voodoo Brew” Drink Recipe Card, designed by Robert, using his signature artwork. So have a drink before the dead begin to rise from their graves — it just may be your last!

More products are already in the pipeline and are expected for an early 2016 release, including a plush severed head based on the sarcastic, wisecracking Killogy character One-Eye Tessio. Fans of the comic will not be surprised to discover that One-Eye comes packaged inside his trusty Italian Ices container, just like in the books.

“Killogy is such an original concept and an amazing read,” said Skelton Crew Studio head Israel Skelton. “Alan is a huge talent and clearly an idea machine. We couldn’t be more stoked to be working with him.”

Robert adds, “With a roster filled with comics greats like Mignola, Templesmith, Hill & Rodriguez, and Layman & Guillory, I am extremely humbled and flattered to be welcomed into the Skelton Crew family! They produce some of the best replicas I’ve seen around and they are completely dedicated to bringing each creator’s vision to life.”