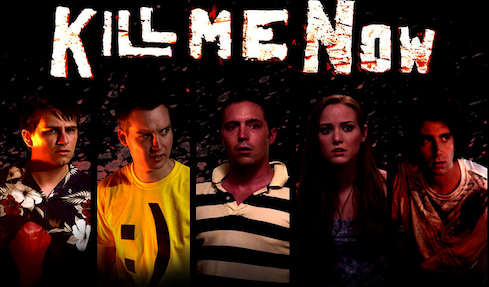 We received word today that the horror-comedy movie Kill Me Now is available for download. Read on for the official release.

In the not-too-distant past, with the help of a windowless van and a jar of chloroform, a group of sketch comedians were hauled off to the backwoods of Illinois to shoot their first movie! The horror comedy features Streamy and Webby Award winner Michael Swaim (“Agents of Cracked”), new “Saturday Night Live” cast members Beck Bennett and Kyle Mooney and the casts of Web TV series “Those Aren’t Muskets!,” “Good Neighbor,” “Tremendosaur,” “Team Tiger Awesome,” and “Horsehead Businessman.”  The film is now available for fans to download directly from the official Kill Me Now website for less than five bucks!

Kill Me Now chronicles one unforgettable night in the lives of a ragtag group of small-town teens. It’s a night that will prove equally unforgettable for the sinister Driller Killer (Brett Fancy – “EastEnders,” “Luther”), a deranged serial killer bent on ridding the world of vapidity and dumbassedness (Everyone Else). When he comes upon the kids’ all-night graduation party–conveniently held at a cabin deep in the woods–he finds both in spades. Unfortunately, Mr. Killer is about to learn something crappy bumper stickers learned long ago: stupid people can be deadly in large numbers. Kill Me Now blends horror, comedy, depth and plain jackassery to form a brew so potent you won’t know whether to laugh, scream, or think about, like, life and stuff. The movie features performances from a staggering array of the Internet’s hottest up-and-coming comedians, writing from the guys behind “Those Aren’t Muskets!” and Cracked.com, direction from a dude whose previous work includes hardcore, joint-smokin’, Twista-havin’, Kanye-featurin’ rap videos, and at least one scene where a chick totally gets a drill to the brain. But it’s funny!