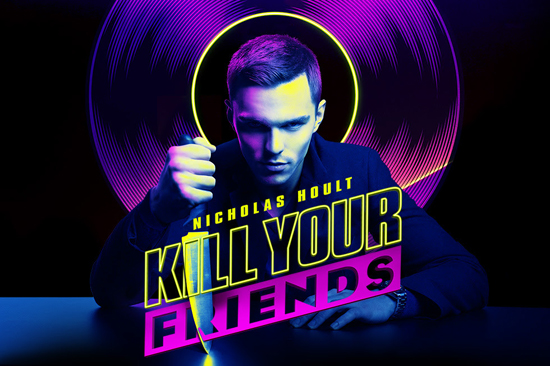 Synopsis: An A&R man working at the height of the Britpop music craze goes to extremes in order to find his next hit.

Our Thoughts: Kill Your Friends is a slick, black comedy centered on an ambitious man, Steven Stelfox, who works in the music business and will do anything to make it to the top. The film satires the 90’s drug fueled Britpop scene in England and the cut throat record executives of the time.

Billed as the American Psycho of this generation, the parallel only partly holds up. American Psycho was one of the best movies of the early 2000’s and that is a hard bar to reach. It’s not quite as deep or as psychological in approach. However, taking place 2 decades back and taking a satirical look at the greed of a specific time and place, it does carry some of the vibe of the American Psycho and you can see why the comparison was made, even if it doesn’t really come close to being as great of a film.

Kill Your Friends ended up being an enjoyable, darkly funny film. Nicholas Hoult (Mad Max: Fury Road, X-Men: Apocalypse) shows he can play a truly bad guy in the role as the sinister Steven Stelfox. For horror fans who enjoy bloody black comedy, you won’t want to miss Kill Your Friends.

KILL YOUR FRIENDS – In Theaters & On Demand TODAY!