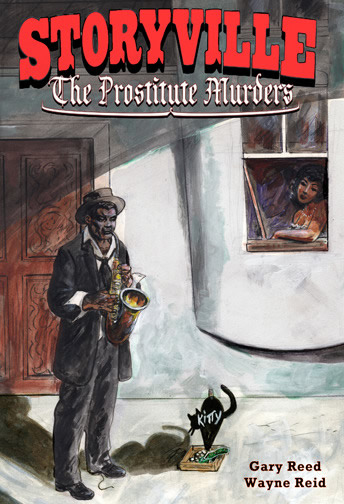 Caliber Comics is proud to announce that CEO Gary Reed has launched a special Kickstarter for the new graphic novel Storyville: The Prostitute Murders. Where pledges, based on the contribution level, will be able to obtain original art pages from the book.

Storyville is a mystery/crime tale set in the Storyville district of 1910 New Orleans.   It was one of the key sites for the “Devil’s Blues” which later became known as jazz. The legalized red light district ran for 25 years and virtually everything was permitted – from sex to booze, from gambling to drugs. The only thing that was not acceptable was murder, because murder was bad for business. When prostitutes and their customers start being killed, Detective Brian Donahue, a transplant from Chicago, finds he has no answer to these seemingly random murders. Enlisting the aid of Dr. Eric Trevor, a psychiatrist at the nearby St. James Infirmary, the two of them embark to unravel the mystery of this new type of killer seldom seen before…a serial killer.

Storyville is created and written by Gary Reed, writer of acclaimed series such as Saint Germaine, Baker Street, Renfield, and Deadworld. He has been nominated (and even won some) for awards diverse as the Harveys, Don Thompson, Shel Dorf, Ghastlies, and others. Main artist on the book is Wayne Reid – Wayne is considered an “old type” artist as his style is very reminiscent of the class black and white days of Eerie and Creepy. Many of his projects have been historically based and working with Gary Reed (see some titles above) but Wayne has also drawn other comics including H.P. Lovecraft, westerns, mysteries, and more. Additional artist is Mark Bloodworth who has done work on Clive Barker’s Hellraiser for Marvel Comics, Deadworld, Midnight Marquee and many others. Mark contributes a short tale contained within the story. Also contributing is Nate Pride – an artist in his own right (B&N Classics, Mouse Guard), Nate has lettered 100s of comics from Image, IDW, Caliber, and more.

Aside from the original art pages being made available, various Caliber comics and graphic novels, art prints are offered for supportive pledges.

The Kickstarter site for this book is:
https://www.kickstarter.com/projects/1804666861/storyville-the-prostitute-murders