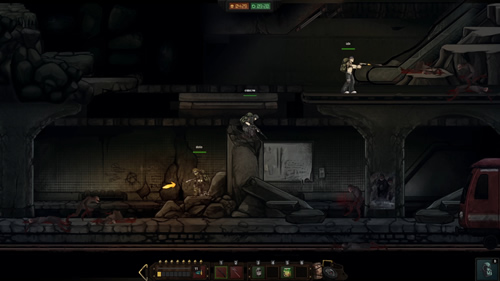 In the harsh and destroyed world of “Still Alive” – a 2D multiplayer pvp survival game – the player has to face a survival situation. While up to 10 survivors are in search of equipment and supplies, they have to defend themselves against each other as well as against the deadly environment of a post-apocalyptic world.

“Still Alive” is taking all the well known survival ingredients – the need to eat and drink, find supplies and craft equipment – and putting them in a detailed 2D world. The developers deliberately decided to go without a persistent world, instead putting the survival setting in short “action packed” multiplayer fights. When a player dies it will be permanent. The survivors of a round will be matched against other survivors in the next round, keeping their loot.

The player will not only have to fight against other players, but also the deadly post-apocalyptic environment: “There will be creeps hunting you – we call them the Screetchers – a form of mutated humans. They will react to sound and movements. Also the air itself will be a threat – it is contaminated with an alien life-form. To breathe that air is deadly and the player has to find an antidote against it”.

You can find more out about the game at the link below.