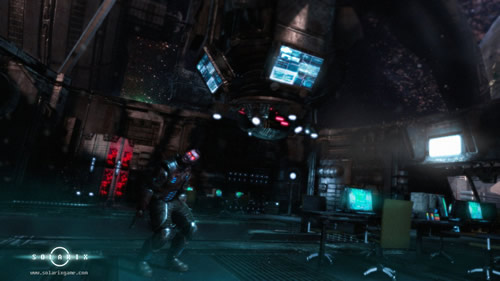 Years spent avoiding infected crew mates with only a distant voice for company….

Battling against the corporations ‘clean-up’ squad who have one instruction – destroy all evidence!

Shadows are your friends; avoidance is your only strategy.

But how long can a mind survive this environment?

Inspired by a range of classic sci-fi movies, ‘Solarix’ is a psychological survival horror game featuring massively detailed open-ended levels encompassing both survival and stealth-gameplay styles.  The game encompasses both alien worlds and a huge orbital space station, with hidden terrors around every corner.

“Our goal is to take the survival horror genre beyond simple staged ‘jump-scares’ and cheap thrills. With Solarix we are looking to create a world that fills you with unease, insecurity and desperation” commented Baris Tarimcioglu, founder of PulseTense Games.

The Kickstarter target is to raise £10,000 to complete the game and for it to be able to realise its true potential.  It has already received approval from leading digital retailer Steam and a Microsoft Xbox version is also being planned.

There are a wide range of rewards for backers starting at with pledges of £6 and running up to £1,500 or more.  Likewise, stretch goals start at £15,000 for additional DLC through to £80,000 for Microsoft Xbox and Oculus Rift versions and for the release of a set of modding tools.

The Kickstarter campaign for Solarix runs until Friday 8 August 2014 and can be found at  https://www.kickstarter.com/projects/kissltd/solarix