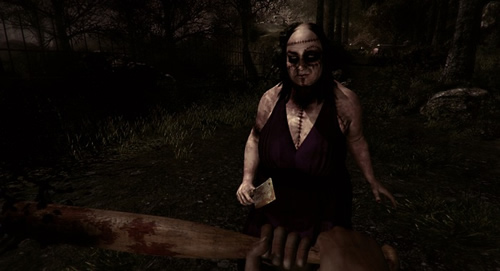 Stalking in the shadows of 2015 comes Death In Candlewood, the debut title from Rosebud Games. Rosebud is a new studio made up of award-winners from the teams who worked on Silent Hill, F.E.A.R. and The Witcher and also consulted with designers from BioShock. Read more of the official release below.

They’ve just hit Kickstarter – https://www.kickstarter.com/projects/1012709089/death-in-candlewood – where they’re seeking $60,000 to complete production. We’d love for you to share this with your readers – and, if it helps you to do so, we’re able to sort out an interview with creator Toni Sanchez.

Jay Kyburz, BioShock Environment Lead and Neptune’s Pride creator, provided design consultation on the game – and came away a fan. “Death In Candlewood combines inventive gameplay with romantic storytelling and sets it all in a gorgeously realised world. A brutal, beautiful shooter,” he said.

Anyway – more info. Death In Candlewood is an open-world psychological FPS heavily influenced by the gothic fiction of Edgar Allan Poe and classic horror films. The game plunges its player into the darkest corners of 1940s America and spans a single night in the life of Ray Dune, a doctor whose relationship with reclusive psychiatrist Lester Caravan has reached a deadly crisis point.  When his vulnerable adopted son Rizzo mysteriously disappears, Dune is forced to act.  Navigating the dark paths of Candlewood Mountains and a terrifying onslaught of inhuman assailants, Dune sets out on a desperate bid to save himself and his son from the bloody machinations of a madman.

Along the way you can traverse the expansive 10km² of game-world in any way you like.  You’ll drive cars and motorbikes, swim through deep waters, use uncommon weapons and face uncommon enemies as you unravel a dark and twisted romance.

“After years of working on horror games, we decided to spend our energy and resources creating a game which evokes intense emotions of fear, love, joy and sadness,” said Toni Sanchez, the game’s creator and founding member of Rosebud. “Death In Candlewood aims to make the player really feel.  We want each location to be full of emotive, memorable features and through every detail build a ghoulish, romantic story in the player’s mind.”

Due for release on PC in the spring of 2015, Rosebud also intend to publish Death In Candlewood on Mac and Linux shortly afterwards pending a successful Kickstarter campaign.  If it goes exceedingly well, you might just be able to experience the eerie, terrifying atmosphere of Death In Candlewood first-hand through Oculus Rift, too…