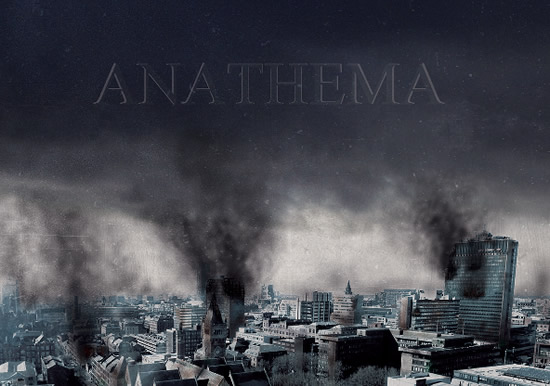 Vacant streets, boarded and lifeless. Nothing stirs for miles around except overgrown plant life, litter and a sharp breeze. A barren, unmaintained reminder of an extinguished era.

The silence is shattered by hollering and crippling screams. A pack of, once upstanding people, brutalize a smaller group, throwing them into the street. The fight is over in minutes as the feral beasts batter the smaller group to submission.

The smaller group is lined together on their knees. They whimper and apologise in vain.

The feral pack search through the small groups belongings before leaving their mess behind. Silence returns.

Mankind’s end is near. Survival is an everyday fight.

Northern UK film-makers, Thomas R. Houston and Dane Jones, are set to launch a Kickstarter campaign for their post-apocalyptic, debut feature film, ANATHEMA. If successful, the funds will be used to produce the movie and help bring this dark and brooding story to screen.

ANATHEMA is a taut, post-apocalyptic thriller/coming of age story following a teenager and his sister as they journey across the country, seeking out the rumours of salvation.

Addison must learn that all he used to know is gone and his life depends on adapting to this hostile new world.

ANATHEMA explores the depth of human behavior and survival in the most extreme situations.

With dark overtones and insurmountable pressures, the film tells a tense story about growing up and the choices we are forced to make to continue.

ANATHEMA’s Writer/Director, Thomas R. Houston, is a seasoned film-maker in short format. Many years in the industry as a freelance corporate & music video director have given him the vision & ability to convey fantastic, personal stories on screen.

The film has received interest in the lead roles from talent such as Alex Etel, lead of Danny Boyle’s Millions and The Water Horse, Amber Rose Revah, most notable for The Devil’s Double and the award winning John Lynch, who starred in Sliding Doors, In The Name Of Our Father and many international T.V. dramas.

The purpose of this Kickstarter is to raise £30k for the production of ANATHEMA.

During and upon completion of production we will raise finance via industry sources and tax credits for post-production/distribution.

You can contribute to this campaign here.