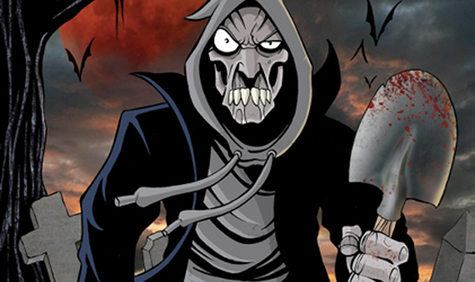 Here at Horror News Network and ComicMonsters, we’ve known for years just how cool “The Living Corpse” is. With “The Amazing Adventures of the Living Corpse” movie based on the comic creation of Ken Haeser and Buz Hasson now out on DVD / BluRay, we thought it was time to catch up with the dynamic duo behind The Living Corpse to discuss comics and movies.

Horror News Network: â€œThe Living Corpseâ€ is a character that is obviously well known to the Horror News Network / ComicMonsters audience. What is it like seeing your creation youâ€™ve worked really hard on for years actually on the screen?

Ken: Pretty cool and seems like forever! The most surreal part of the experience for me would be when the movie producers flew me and Buz out to San Diego Comicon for the screening and then seeing it on the big screen in front of an audience. Everyone who worked on the movie put everything they had into it, especially Justin, the director. I think it definitely shows through in the movie.

Buz: It’s a dream come true really, I’ve been imaging it as a reality since I was a teenager.

What’s important to us is that fans can get into the idea of him as a character, whether it’s movie or comic. We’re inspired by properties like “The Tick,” and “Teenage Mutant Ninja Turtles” in light of how independent ideas become mainstays. So we wanted to create something similar that would continue to grow and evolve. We love seeing other artists renditions of our character. It’s kind of like Batman. There are a lot of versions of him, and they all work wellmost of the time too. The Living Corpse is like our Batman in a way. He was inspired by Ash from “Evil
Dead”, Hellboy and the Goon, but with the spirit of the black and white boom that came from the comicindustry in the 1980’s.

Horror News Network: The Living Corpse isnâ€™t a regular zombie, he has more humanity and is sort of â€œsuperhero-ish.â€ Tell us how that plays out in the film?

Ken: They really play up the “zombie superhero” angle in the movie that we do in the comic. You get to see the Living Corpse fighting all kinds of monsters, but at the same time see him learn how to be the Living Corpse that he is now.

Buz: It’s actually the basis for the film. The idea was to show that very aspect of him and some good action too. The movie plays more like a prequel to the comic. Another thing to mention is “R” rating. Justin Ritter and the producers were all pushing for a PG-13 rating.. We got an R for reasons that would lead to a five year old accidentally watching the film around an older sibling. We just want fans and parents to know that it’s actually not a true R rated film and never was intended to be. It was intended for young zombie/comic book fans to take in and turn this obsession with zombies into a positive thing.

Horror News Network: With your â€œThe Living Corpseâ€ story behind this animated journey, describe the look and feel of the film? Does it have all the elements of a live action horror film?

Ken: It’s definitely a lot more stylized than if it was live action. They wanted to get the cartoony look of the comic, so they had us do the character designs to keep the same look but brought to life in three dimension.

Buz: It’s more of a cartoon network style animated show with a feature length quality to the story. Its an independent film, so it had an independent film budget, but it has mass market crossover value.So now here we are in the global arena with our zombie superhero making some waves.There’s still alot of plans for the Living Corpse and he’s not done yet by a long shot. Fans can expect new comics to keep coming, as well as films and other projects associated with his character.

Horror News Network: Right on the heels of the movie in June is â€œThe Living Corpse: Hauntedâ€ one shot in August. What can readers expect with the Corpse unleashing his fury in an abandoned mental institution?

Ken: “The Living Corpse:Haunted” is a forty page one shot that has three ghost themed stories. The lead story by me, Buz and Blair is called “Haunted” and has the Living Corpse investigating a severe haunting at Pennhurst Asylum (an actual haunted hospital down here by me and Buz), which takes place during the Living Corpse movie when he is still learning the ropes.
The second story is Edgar Allen about the ghost of Edgar Allen Poe. This one is written by Keith Thomas (Zenescope’s “Screwed”) and drawn by our colorist, Blair Smith. The last story is a crossover with Mumbles the Clown from Rob Dimension’s movie, “No Clowning Around.” It’s a star studded extravaganza!

Buz: There’s more hi-jinks and wise cracking zombie action. The Living Corpse isdoing what he does best, teaching the dark side they’re on watch and that he there to right wrongs in the afterlife..hahaha!

Horror News Network: Does the book tie into the movie?

Ken: “The Living Corpse:Haunted” definitely ties into the movie. We even have guest appearances by Justin Ritter (the film’s director) and Morris Ruskin (Executive Producer) in the story as paranormal investigators. The story also introduces Worthless Murk, who was created for the movie,in his first comic book appearance.

Buz: I think it does mostly around the zero issue. It’s more of a prequel captured between Issue #0 and Issue #1 from the Zenescope published material now recollected in the Dynamite omnibus available at www.dynamicforces.com

Horror News Network: Do you think the dynamic between you two, both creatively and just in general, has anything to do with the underground success of the comic? Honestly, you have a very loyal indie horror comic fan base.

Ken: First and foremost is that me and Buz do The Living Corpse to entertain ourselves and I think that really comes through when you read the book. If you’re not having fun with it, I think it shows. We both love the same stuff, we’ve got the same taste in movies, comics and music and that comes through even when we are sitting around drawing this stuff. We are very appreciative to all the Living Corpse fans who have let us just go crazy with this stuff.

Buz: Yeah, we’re alot like guys in a band, always jamming on ideas and sketches and drawings. The camaraderie is genuine and the respect for each others lives and work is mutual.We extend that into the realm of other artists we meet as well. Sometimes creators are arrogant, sometimes there down to earth. Needless to say which ones we are drawn to more. Horror News Network allowed us to reach beyond our own drawing tables, and into the lives of fans and fellow creators. It’s rewarding alone to be apart of a global family of like-minded individuals. Support rewards with more support and we 99% percent of the time enjoy everyones work especially each others.

Horror News Network: Because you do have a strong comic fan base, do you think they will feel that the film does â€œThe Living Corpseâ€ character justice?

Ken: So far the fans that have seen it have said it stays very true the comic with lots of action, monsters and laughs.

Buz: I do! I think our fans will love it and want more and I’m here to say more is coming. That’s a promise!

â€œThe Amazing Adventure of The Living Corpseâ€ hits the streets (DVD/Blu-Ray) on June 18th, while â€œThe Living Corpse: Haunted one-shot drops in August. Both are available for pre-order now.