Twenty years before The Last Drive-In on Shudder (but after Joe Bob’s Drive-In Theater on The Movie Channel), prolific movie critic and television show host Joe Bob Briggs was welcoming millions of horror fiends to watch b- and c-level genre films with him on TNT’s MonsterVision.  From 1996 to 2000, Briggs (real name John Bloom) would present two movies to be dissected and appreciated how only the cult film crowd could do.  Now there is finally some hope to the fans who currently can only watch old show segments via grainy clips on YouTube that a brighter day (and picture) are on the horizon.

Briggs announced on both his official Twitter and Facebook accounts that an “official release” of the beloved MonsterVision shows is in the works.  Though no other details have yet been provided, this is music to the ears of all cine-philes that long for those Friday and Saturday nights in the mid- to late-90s chewing over the “Drive-In Totals” for that night’s films along with Joe Bob’s corny but harmless jokes.  MonsterVision was a unique show, with highlights during its run including a Halloween night marathon of six Friday the 13th movies, on-set interviews with Hollywood heavyweights like Wes Craven and John Waters, and of course the long line of various “mail girls” waiting to deliver both fan feedback as well as some humble pie to the hilarious host.

In the social media posts, Briggs begs his fans to not waste their money on bootleg copies as the upcoming release will be well worth the wait.  As of now, it is unclear whether it will include both the host segments and introductions as well as the actual films or just the Joe Bob spots, but either way this is what fans of the show and horror in general have deserved since TNT unceremoniously dumped the host and format of MonsterVision on July 8th, 2000.  Hopefully there can now be some closure for Joe Bob fanatics since that final airing of Children of the Corn II. 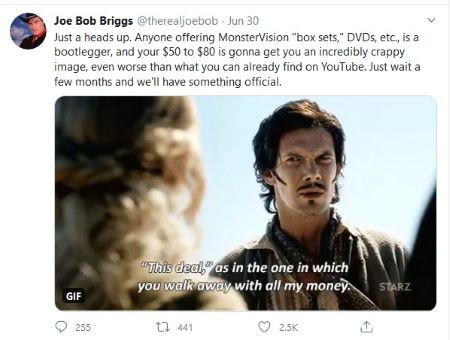 Stay tuned to HNN for more details on the upcoming MonsterVision release as they become available!