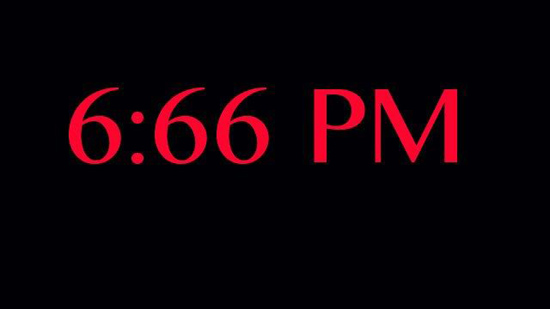 Jim Klock’s ‘6:66 PM’ Invites You Into a Ghostomedy with Early Stills

“Evil has an Hour to Kill!”

Los Angeles, California: 6:66 PM is a co-production from Full Auto Films and Code 3 Films. Shooting on their latest production has recently completed, with Jim Klock (“Scream Queens”) at the helm. A former narcotics detective and now actor, Klock has directed several horror films, including Murder Eleven (2013) and Massacre on Aisle 12 (2015). Klock is reteaming with actress and producer Autumn Federici (Circle) on this film, which blends a horrifying tone with comedy elements. Chad Ridgely and Alexis Kelley also star in this supernatural feature, with several stills from the film available now!

6:66 PM begins with a hired television crew. They are in search of haunted locations and stories of the paranormal. Skeptics, they believe that their next location will house nothing unusual. But, they are wrong! An old home hosts the spirit of a serial killer and he is not finished killing. Now, these first-time paranormal investigators are at the mercy of a true dark heart.

Director Klock also stars in 6:66 PM as Daniel. Daniel’s terror can be seen in the film’s latest stills. And, Klock says of his experience on directing and starring in 6:66 PM: “the horror-comedy genre works well when you trust that the circumstances and characters are funny enough, all you have do as a director/actor is embrace the ridiculousness of it all.” Some of that ridiculousness can be seen now, with these comedic shots, from 6:66 PM!

Official synopsis: “6:66 P.M. proves evil has an hour to kill as a reality TV crew’s staged investigation into the paranormal becomes terrifyingly real. When the house they’re exploring turns out to really be haunted by the ghost of a serial killer, each crew member fights to stay alive and more importantly make their reality show a hit at any cost.”

KILL YOUR FRIENDS – In Theaters & On Demand TODAY!