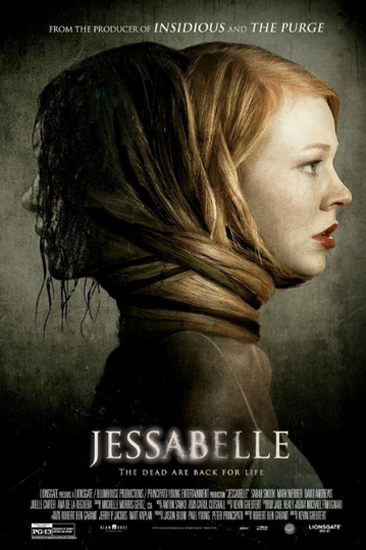 Synopsis: Returning to her childhood home in Louisiana to recuperate from a horrific car accident, Jessabelle comes face to face with a long-tormented spirit that has been seeking her return — and has no intention of letting her escape.

Our Thoughts: ‘Jessabelle’ is a fresh take on a very over done genre. In terms of scares, it’s a bit predictable, however the story itself skips the usual cliches for this type of film. Relying on practical effects rather than the usual digital, the result is an original, intense and shocking, yet intriguing supernatural story that kept me guessing until the very end.

When Jessabelle returns to her childhood home, she finds old video tapes her now deceased mother had made for her before she was born. Included, is some particularly creepy tarot readings her mother does for the future Jessabelle. Among her predictions, her mother knows of her future accident, return home and says there are two other spirits with her, one of whom wants her out of the house. Her father becomes enraged at her snooping and destroys the tape when he discovers her watching it. Jessabelle decides to keep snooping and finds yet more tapes her mother left for her. Each creepier than the next. Before long she begins having seriously scary nightmares of a malicious spirit trying to kill her. Her parents’ long kept secrets start unraveling and the more she finds out the more questions she has. Jessabelle is confined to a wheel chair while she is healing from her accident, which makes what’s happening in her home all that much harder to deal with for her, and that much more intense for the viewer.

All of my guesses as to what was going on were completely wrong. The conclusion was darker and more twisted than I could have imagined. They could have used a handful of cliches for this kind of film and I was honestly expecting at least one of them, however to my surprise the film makers took an original approach to the story. The film ends on a cheesy note, however I did enjoy it over all. I especially enjoyed the use unique of the tarot cards in the film, which are used to tell the distant future. The use of the jump scares was unnecessary and I found that aspect predictable. However the effects used for the dead girl herself were very effective and at times reminded me of  ‘The Evil Dead.’ The film relies more on practical effects than digital for its haunting which is a refreshing change of pace for a supernatural film. Sara Snook gives an excellent performance as the haunted Jessabelle. Horror fans looking for something different from supernatural horror should check out ‘Jessabelle.’