Everybody out of the water! Bruce the shark is back–and he’s out for blood!

The most famous shark returns in one of the most thrilling horror movies ever when Steven Spielberg’s masterpiece, Jaws, marks its 45th anniversary with a new Blu-Ray and 4K Ultra HD combo pack on June 2, according to Universal Pictures.

This special anniversary release is the first opportunity for fans to own the Oscar-winning film in 4K Ultra HD format.

The new offering reportedly is jam-packed with more than three hours of bonus features. And, in case you thought that’s not enough, Universal also included a 44-page booklet with introductions, rare photos and storyboards from the historic 1975 movie.

The bonus features on the 4K Ultra HD and Blu-Ray versions include: “The Making of Jaws,” “The Shark is Still Working: The Impact and Legacy of Jaws,” “Jaws: The Restoration”, various deleted scenes and outtakes from the original and a theatrical trailer.

As all fans know, the movie’s terror starts to build from the first few frames when a teenage girl goes for a moonlight swim in the waters off the New England community of Amity Island and is slaughtered by an unseen shark.

This horror leads to the town’s chief of police (Roy Scheider) closing the beaches over the strident objections of the mayor (Murray Hamilton) and enlisting the help of a marine expert (Richard Dreyfus).

The police chief (who, ironically, hates the water) and the young scientist then venture out with a volatile ship’s captain (Robert Shaw) aboard Orca to “go fishing”. What happens to the intrepid trio is pure movie magic.

Jaws was nominated for four Oscars and took home awards for film score (for the brilliant work by John Williams) and sound editing.

This new release is worth the $34.98 price tag if just to hear Scheider utter arguably the best movie ad-lib of all time: “You’re gonna need a bigger boat.” 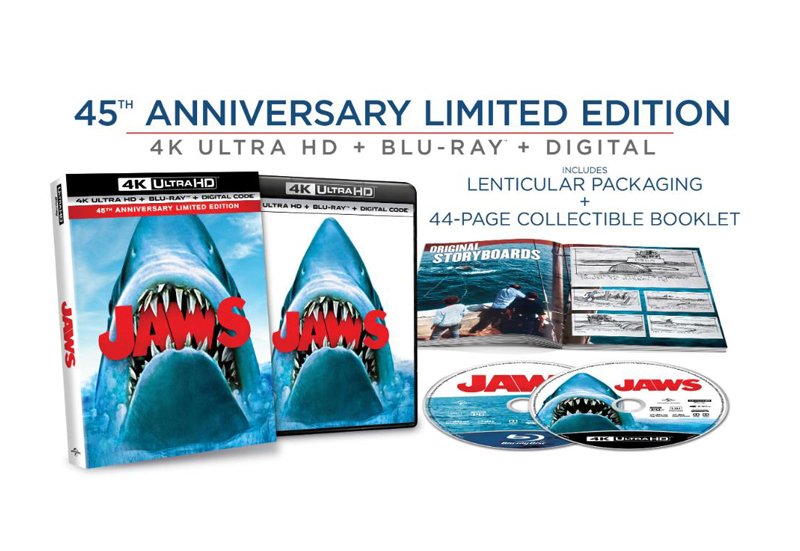