Many horror fans still talk about the now-legendary appearance of Jamie Lee Curtis at HorrorHound Weekend in 2012. After years of inactivity in the horror community, the original Scream Queen would be signing autographs and granting photo ops to anyone lucky enough to make it to Indiana and also manage to grab a coveted ticket. And better yet, all of the proceeds went to Children’s Hospital Los Angeles. This was touted as the one and only chance fans would have at getting pictures taken with Jamie, and getting their horror items signed that have gone way too long without being complete with the most precious of signatures.

There’s a documentary on the most recent blu ray release of Halloween that shows all of the gory details of that event: never-ending lines of eager fans, rooms full of people waiting and waiting, and Jamie Lee soldiering through all of the extra hours it took to keep up with the demand. Anyone who has ever attended a convention in hopes of meeting a major guest knows that this could be a frustrating experience for both the guest and the fans. It’s no wonder this was a one-and-done kind of event, and Jamie Lee Curtis has once again become one of the most elusive photo ops in all of horror fandom.

One of the reasons Jamie Lee has not been active in the horror community (until the recent show, Scream Queens) is because she has been a prolific writer of children’s books since 1998. Jamie says she became inspired to write in this genre of literature when overhearing her daughter, who was four at the time, explain how she once wore diapers but now she doesn’t. It got Mrs. Curtis thinking about that window of early childhood, and how children begin to chronicle their own lives the way we do as adults. Her books have been very successful, earning multiple awards and spots on bestseller lists. Her most recent book, This Is Me: A Story of Who We Are and Where We Come From, illustrated by Laura Cornell, tells the story of students responding to a teacher’s assignment that asks them to fill a box with items that represent who they are. The story promotes positive motifs of diversity and acceptance, and there are even some references to Weird Al and Groucho Marx for the grown-ups reading the book to their kids. The work is typical of Jamie Lee Curtis’ work ethic and high standards. What was not typical was the way she would be promoting the book.

Internet message boards began buzzing when Jamie Lee was announced for book signings at several locations across the country. What would the event be like? Would photo ops be allowed? Historically, she has been very serious about keeping her work on children’s books separate from her work in the film industry, and her biggest fans knew not to show up at a book signing with photos from The Fog. However, the times have changed since Horrorhound. Between that event and a private signing, Jamie Lee Curtis autographed horror memorabilia can be had for the right price. A photo opportunity is still the ultimate prize. A day or so before the event, Bookends Bookstore of Ridgewood, New Jersey, announced that they would be making fans’ dreams come true. While Jamie would only be signing copies of her new book, she would be taking photos with fans!

On Monday, September 19th, hours before the scheduled start time, fans began to form a line within the tiny and modest book store. Looks can be deceiving, though; this small shop has hosted multiple signings for members of Kiss and Hollywood superstars such as Gwyneth Paltrow and Cameron Diaz. More and more major celebrities have been adding a stop at Bookends in between larger events in New York City because of the efficient and intimate opportunity it provides between them and their fans. Jamie Lee Curtis’ event would be no different. 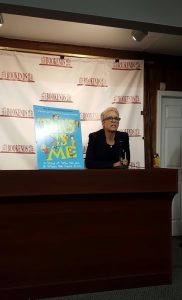 Fans were seated in the lower level of the shop, which was filled with chairs and a podium and amplifier. While some children were present with their parents, the sea of Tool and Michael Myers t-shirts reflected the horror fans who had heard about the event. The first thrill of the night came when staff members handed out bookmarks with an exciting set of directions on them, entitled, “Want a selfie with Jamie?” The answer was clearly, “YES!”, as the room sprung to life. It was really happening! We were really going to get our picture taken with Jamie Lee Curtis!

Jamie arrived at the shop almost an hour early to greet her fans who had been waiting. She had flown in from Los Angeles very early in the morning and she was eager to get started. She stated that she would answer a few questions from the audience, then she would sign for some people, and then would answer more questions at the posted start time for the event. The first question asked was about how she got involved in Halloween. Historically, this was not the kind of question Jamie would have wanted to answer at her children’s book signing… but this time she was happy to oblige! She told a story about being fired from the recently-cancelled Operation Petticoat and almost immediately being called in for an interview for Halloween, stressing her philosophy that when one door closes another opens. She seemed to be in the mood to mix her different career paths that night, and she explained that the next morning she would have three and a half minutes to explain both her book about diversity and her upcoming appearance in the bloody Scream Queens Season 2 during a spot on Good Morning America.

The rest of the questions spanned her entire career, and she was happy to share insight into fan favorites like True Lies and NCIS. Jamie answered the questions in a laid back, thoughtful, and interactive way that made everyone feel very comfortable. There was a sense of familiarity that existed, even though she had never met any of us before. 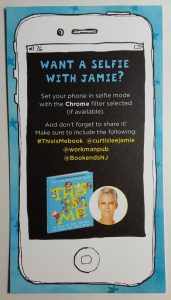 Next, the signing and photo op procedure began. Jamie briefly explained how she would be signing, and that she was an expert at taking selfies and she would be happy to do so for anyone who wanted one. The line was well-organized and nicely controlled. Between the bookmark directions and the organized nature of the event, it was clear that Jamie Lee Curtis knows what she wants and she knows how to communicate what she wants. This led to fans having excellent experiences with her by following the guidelines. Instead of signing from a seated position and taking sloppy pictures with her fans hunched over, she stood up and greeted each new person, signed, and posed for a nice photo. She took time to speak with every fan in line, and she was happy to write dedications in the books. She took care with every photo op, and the glow on each fan’s face as he or she left the line was priceless. It was clear that she knew how important this event was to her fans and she took it very seriously.

It turns out that the hottest photo opportunity of the year could not be had at a major convention hall for $400. It could not be had along the red carpet at a Hollywood premiere. Instead, Jamie Lee Curtis’ fans’ dreams came true in the tiny basement of Bookends, New Jersey… the cost of admission being just the price of her book. It seems that the combined press tour related to the releases of This Is Me and Scream Queens Season 2 created the perfect opportunity for Mrs. Curtis to combine all of her talents to provide the perfect event that all of her fans will never forget. 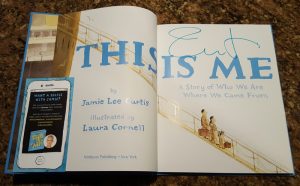