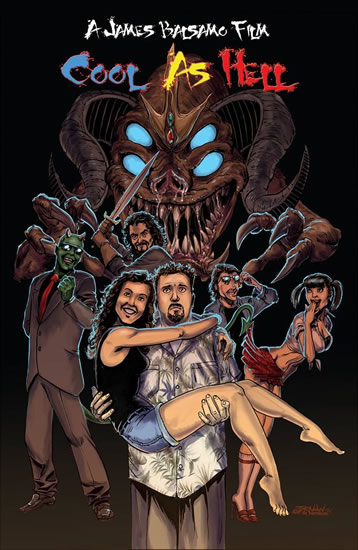 Recently, Sr. Editor Christine Caprilozzi had a chance to catch up with  indie filmmaker James Balsamo to take about his latest release “Cool as Hell” and what’s on the horizon for Acid Bath Productions.

Horror News Network: “Cool as Hell” pretty much centers around Rich, who works at the comic book store and has a horrible time with the ladies, and fitting in.  As someone who not only covers comics, but is also a comic fan, I felt like I knew Rich.  What was the thought behind making your main character (played by you) this awkward comic book store guy?

James Balsamo: Rich is the awkward comic book geek in all of us, but really inside of me. I’m a huge comic book geek, but unfortunately I don’t have the same time to read them like I did before I started making feature films. I have a pretty extensive comic book collection ranging from the old E.C. Tales from the Crypt comics to the always beautifully drawn Vampirella, but my favorite is my Mr. Monster collection.  I actually was able to reach the creator, Michael T. Gilbert, to feature Mr. Monster in the film. Talking about the series is what brings Rich and the love interest, Ashley, played by Lauren Adamkiewicz, together. I have such a love for comics that I decided to make one out of a previous film of mine…but I’ve already said too much…

Horror News Network: There are some very cool cameos in the film including horror legend Tom Savini, as well as Andrew WK.  How did those appearances come about?

James Balsamo:   Acid Bath Productions is a growing company that has already worked with so many major stars and big bands. We’re always hearing from celebrities and touring musicians that they’re excited to work with a horror company that really understands the genre. Andrew W.K. was in my previous film, “I Spill Your Guts,” so we were excited to have him in back “Cool as Hell”. Tom Savini was a big inspiration to me as an FX artist, so it was a real honor to have him as a part of “Cool as Hell.” Acid Bath Productions continues to feature the horror & music industry’s top names and our newest feature, “Catch of the Day,” has more cameos than any of our previous films and most of today’s Hollywood features.

Horror News Network: The film is a horror comedy, but you can obviously see all the nods to the horror culture in your work.  Who, as a filmmaker, has influenced you and your films?

James Balsamo: I’m a movie guy, plain and simple. I don’t like sports; I don’t like to run; I like movies. Before I made movies, all I did was watch them. I was raised on classic American horror directors like Wes Craven (A Nightmare on Elm St.), and John Landis (An American Werewolf in London), but I quickly became addicted to Italian horror films. Lucio Fulci and Dario Argento are big influences of my work, as well as Mario Bava. Bava was the inspiration to the main characters name in my film “I Spill Your Guts,” Joe Bava. I believe that filmmaking is just like playing a musical instrument; you can always learn a new trick from someone else.

Horror News Network: Az, the demon isn’t as scary as he is sassy. What sort of direction did you give Billy Walsh?

James Balsamo: Az the demon is a warped combination of Maurice from “Little Monster” and Beetlejuice. There’s a running joke in this film that Az isn’t a scary demon because he isn’t from one of the lowest levels of hell. Billy Walsh and I had a lot of fun with this character and I really let Billy run wild. Once he put in the full set of fangs, Az took over on set.

In the film, Az couldn’t physically harm Rich because he was under his control, but he wasn’t going to make his life any easier. A few of those stories from hell that Az is recanting are total ad-libs, including the story of how Az dated Elizabeth Bathory. I wouldn’t be surprised if Az popped up in a future Acid Bath Productions feature.

Horror News Network: “Cool as Hell” is really s fun film. Even the scenes with Sal (played by Frank Mullen) is supposed to be total jerk, are hilarious.  Was it as fun to make?  What is the set like on a James Balsamo film?

James Balsamo: “Cool as Hell” was a blast to make. Frank Mullen is an amazing actor and it was really hard to keep a straight face through some of his insult-spewing rants. In fact, the cast and crew would have to hold their breath off camera not to mess up the audio by laughing in between Frank’s takes.

Everyone on set is really committed to the joke and I think that’s what makes “Cool as Hell” such a fun movie.

The reality of disbelief is suspended to bring Az the demon to life. Generally, we have a lot of laughs off camera with the long hours of filming. Come on, if you don’t laugh, you’ll just kill each other. We shot a lot cameos with touring musicians, so we would go to gig, hang out backstage with the band and then film after the show. The life of the rockstar and low budget movie star are similar…always working hard and partying harder.

Horror News Network: What’s up next for you?

James Balsamo: Acid Bath Productions has just wrapped production on our fourth feature film, “Catch of the Day”. It’s a buddy cop horror fish comedy. “Catch of the Day” is most action-packed creature feature film yet! We pulled no punches on this film using real explosions and old fashion squibs. Acid Bath Productions has come to be known for its gore, gratuitous nudity and celebrity cameos. Of course, “Catch of the Day” delivers those things by the boat load.  The film features Jason Mewes, Jake ‘The Snake’ Roberts, Jasmin St. Claire and Jimmy Duval. There’s also an awesome soundtrack featuring music from MxPx, Less Than Jake, Protest The Hero and Here Come the Mummies, just to name a few bands.