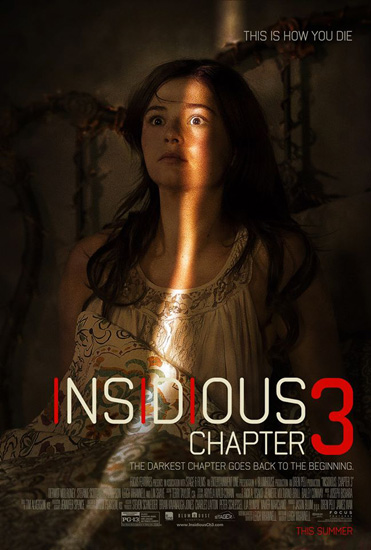 Synopsis: A prequel set before the haunting of the Lambert family that reveals how gifted psychic Elise Rainier reluctantly agrees to use her ability to contact the dead in order to help a teenage girl who has been targeted by a dangerous supernatural entity.

Our Thoughts: In this prequel to the ‘Insidious’ franchise, we learn a lot more about key character to the films, psychic Elise Rainier. Rainier had been a practicing psychic for years, until the entity that we know as ‘The Bride in Black’ becomes attached to her and she stops. However, she finds herself working again when she can’t turn away a desperate family.

The haunting in this case deals with a teen girl who is trying to contact her deceased mother and inadvertently attracts a malevolent spirit. Consistent with the entire series, there are no cheap scares. All of the scenes that made me jump were legitimate incidents of terror. Unfortunately there is some stupidity on the part of our main character Quinn, which puts her in the position to be attacked, as is the case with a lot of horror films.

For much of the film, I found myself on edge and completely wrapped up in the story. Exceptional special effects and some rather disgusting, bone crunching scenes left me cringing. The comic relief that fans have come to know and love in the series returns as well, with ghost hunters Specs and Tucker, and this is their first time working with Elise.

Overall I enjoyed the film and it is on par with the other films in the series. However, I found some of the ending of this one to be a bit sappy. Otherwise it was an excellent prequel to the ‘Insidious’ series. Fans of the previous films with not want to miss ‘Chapter 3’ . For those that haven’t seen the others, even though you will not understand the references to the future events, you will still enjoy it. ‘Insidious: Chapter 3’ is a must see for horror fans and I predict it will be one of the better horror flicks out this year.