Image’s new horror series Infidel is one that will appeal to fans of atmospheric horror stories as well as those who enjoy smart, socially conscious writing about the real fears that are created through prejudice and ignorance.  Former DC editor Pornsak Pichetshote makes his impressive writing debut in this series and artist Aaron Campbell compliments Pichetshote’s nightmarish script perfectly.

Infidel throws the reader into the deep end of the pool immediately, as our main character Aisha experiences a horrific nightmare that includes insects and a pale ghoul that wants to gently chomp on her throat.  This opening scene begins the uncomfortable atmosphere of tension and claustrophobia that permeates the story, both inside and outside of Aisha’s apartment.  There are certainly breaks in the tension (such as the baking of a Return of the Jedi inspired cake), but the underlying feeling of dread is ever present, even in scenes which seem mundane or day-to-day in comparison to the opening scare.

Pichetshote does a fine job of establishing the characters as believable people through his script, conducting realistic conversations with and between the characters, especially in light of the spectre of everyday racism that stalks Aisha and her family. Most importantly, the writing never comes off as “preachy” or contrived; when Aisha and her friend discuss the strained relationship between Aisha and her mother (a woman who Aisha describes as a person who obsesses “…over the shadows in a room full of light”) it comes off as a typical and yet complicated relationship between a mother and daughter that will ring true for many readers.

In terms of artistic realism, Campbell handles the everyday scenes that take place in the apartment and busy urban streets, but he also conveys terror through the creepy pale man at the start, and a disturbing ghost at the end of the issue.  His “horror moments” take on a different look, with a lot of smudging and shadows compared to his take on each character’s time in the light of day.  The final scene in the debut issue was a true heart-stopper, but not in the way you would expect for a horror comic, leaving a type of cliffhanger that is difficult to pull off after only one installment.

Fans of last year’s break-out hit Get Out will certainly enjoy this contemporary exploration of the politics of relationships, gender, and religion, with a healthy dose of nightmare material.

Infidel #1 will be released on March 14 at finer comic book shops everywhere. 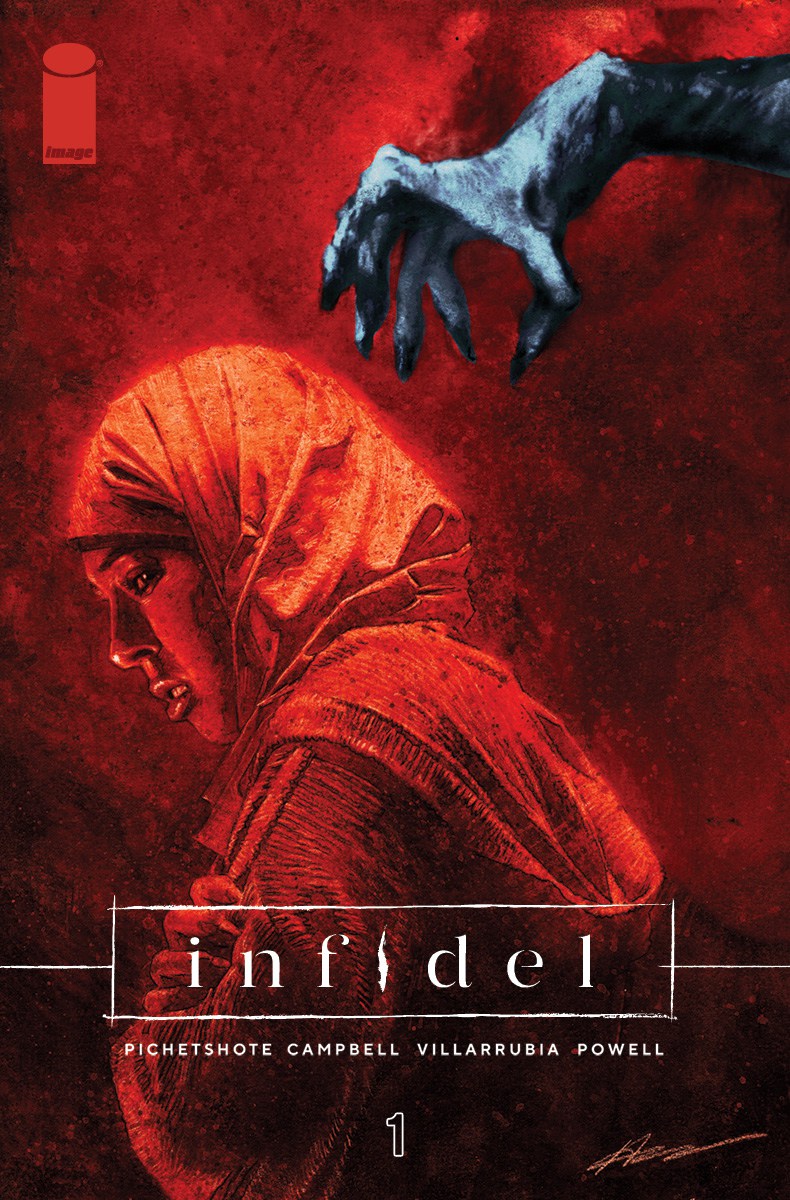