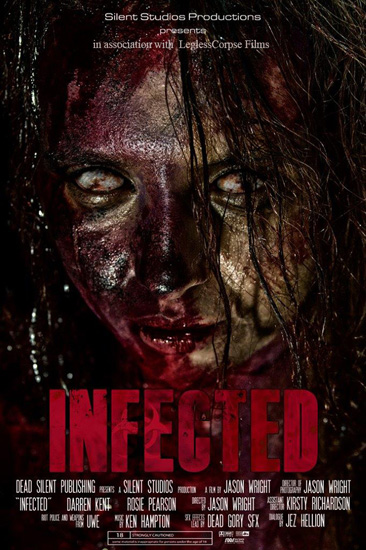 Synopsis: After the accident, Rebecca discovers herself in a very different world than she remembers. Plagued by her patchy memory and self-doubt she fends for herself. She encounters Gary who tells her a terrifying story of his escape from the local jail. Can Rebecca trust Gary? Can she cope with what she learns? Can she survive in the world of the ‘Infected’. Infected is a short horror film.

Our Thoughts: ‘Infected’ is a an awesome zombie filled short film that fans of the genre will not want to miss. Gore and blood abound, the film makes the most of it’s small budget. Although short, the story is action packed and gut-wrenchingly tragic.

Rebecca must figure out what do when she wakes up alone and bloodied in a world of zombies.  After meeting only one other uninfected human, and seeing what the world has become, she begins remembering what her life was.  Rosie Pearson (‘Crying Wolf’) is excellent as the lost and traumatized Rebecca, and her performance drives the film.  At the end I was left wanting to see more, and I would honestly love to see this made into a full feature film.  A twisted tragic story, ‘Infected’ is great addition to the zombie genre.  If you love zombie horror flicks or shows like ‘The Walking Dead,’ you need to check out ‘Infected!’

The crew behind the film is trying to raise money to get the film into film festivals around the world with their ‘Festival Funding‘ Indiegogo campaign.  In addition to that, ‘The Digital Dead’ is asking readers and supporters to donate to the campaign.  Everyone who does will receive a FREE copy of the magazine and be entered to win awesome horror prizes!