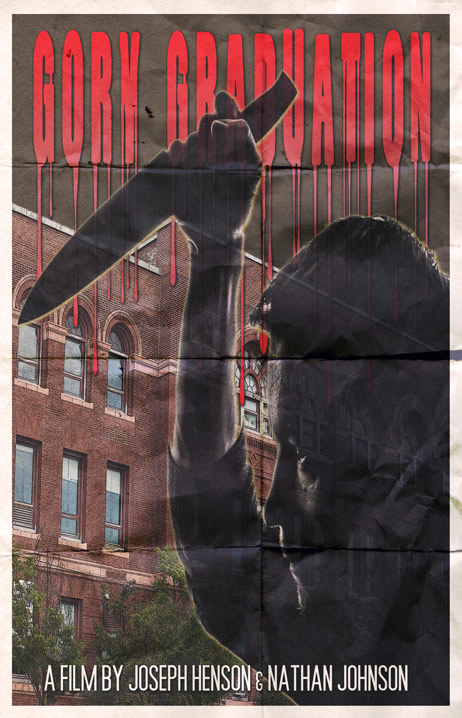 A crowd funding campaign has been launched for the horror movie, Gory Graduation. Read the official release below.

One week prior to their high school graduation, a group of students are given the task of decorating the school gymnasium for the upcoming ceremony. While some are more than happy to help, others aren’t too keen with having to give up a Saturday evening. Meanwhile, Principal O’Hara is faced with a budget crisis that may end with the next school year being the private institution’s last. Already cutting financial corners by holding the graduation ceremony on school grounds and using her students as slave labor, Mrs. O’Hara weighs the pros and cons of a fiduciary opportunity presented to her that may save the school from closing. Elsewhere, one student, excluded from attending the graduation ceremony, breaks into the school with the sole purpose of wreaking havoc. For the students and faculty of this once-esteemed institution, the worst is yet to come: someone has stolen a ceremonial cap and gown and seems to have access to an arsenal of weaponry, their sole mission to ensure that the school colors run blood red.

Way back when, say the late ’90s or the early stages of the 21st century, the IMDb was an unreliable film museum of sorts; even more so than it is today (thankfully, the IMDb has tightened ship, as it were, on user submissions). One such piece of film history that only true die-hards of the slasher movie sub-genre may know about or, even remember, is a little movie called Gory Graduation.

Starring Lesleh Donaldson (Curtains, Happy Birthday To Me) and a few other memorable scream queens and kings from the early ’80s, a plot description was non-existent as was any crew information. The film languished in obscurity. So obscure was it, actually, that it never really existed.

“I can remember spending years searching for any information on this elusive title, being then as much of a slasher completist as I am today and getting absolutely nowhere,” remarks Joseph Henson, director of Gory Graduation. “I thought to myself, here is a film, with such a provocative title, that NEEDS to be made.”

Of course, through the advent of social media, enough information was finally unearthed to determine the film was nothing more than a fake title, stirred up by someone who, like Henson, probably wanted to make it but never did. The title was eventually removed from the IMDb and that was that. But boy, if you were active during the golden years of the alt.horror newsgroup or the birth of now-infamous horror sites, you remember the stir that was caused by this elusive title that was nothing more than chicanery.

Of course, Henson and cohort Nathan Johnson (who co-wrote and co-directed The Night Before Easter with Henson) would promise themselves time and time again they’d eventually make their very own slasher one day (they are two of the biggest fans of the sub-genre possible, even being half of the wildly popular Trans-Atlantic, all-slasher podcast, The Hysteria Continues) even though they knew next to nothing about actual film making. They finally got their chance to make their own slasher with The Night Before Easter (2014), an exceptionally low-budget effort shot on a Canon T3i with little else in the way of equipment or budget. “The Night Before Easter, as clunky as it is, was a massive learning experience for us. Since wrapping that movie, we’ve spent hours upon hours, days upon days, and weeks turning into months soaking up knowledge on film making. How to stage scenes, internal camera settings, sound design, lighting, et al. We couldn’t afford to do a lot of things on The Night Before Easter but we plan to take what we’ve learned from that experience, on top of a (hopefully) much larger budget and go from clunk to spunk, as it were,” notes Henson and Johnson.

The plot concerns a graduation ceremony that becomes the stomping grounds for a killer decked out in ceremonial robes. It is, at its core, a no-nonsense slasher film with a massive body count and lots of gore, nudity and, above all, likable characters.

“I’d like to think of it as some sort of strange melange of films: the intensity and gore of something like High Tension, the John Waters-esque buffoonery of the fifth Friday The 13th film (A New Beginning) and, say, the “throw twists and see what sticks” nature of Happy Birthday To Me,” Henson remarks. “…and of course, lots of blood and ample nudity – sometimes together!”

Nathan Johnson remarks, “One thing we take seriously is criticism. The Night Before Easter wasn’t a perfect film but it was a lot of fun and I think a lot of the positive feedback we garnered speaks for itself. A lot of filmmakers read their critiques and sulk; we take that and try to apply it to what we’re working on next: in this case, Gory Graduation. It’s going to be a lot of fun.”

Gory Graduation has finished the script and casting process and Henson and Johnson are currently raising a budget to purchase more equipment and to hire a much larger cast/crew, on top of locking down a local high school (with, thankfully, a laid-back principal who has given the go-ahead in determination of budget).

“We feel that The Night Before Easter was a trial run, a get your feet wet sort of thing, or a rough draft into something better. I had a rudimentary knowledge of editing and went in knowing little to nothing else. Nathan and I were essentially two guys throwing something together with little money and very few resources, but all things considered, we think we made… Something. With Gory Graduation, we’re going to erase the mistakes we made and triple the stuff that worked,” Henson concludes.

You can find the Indiegogo campaign here.