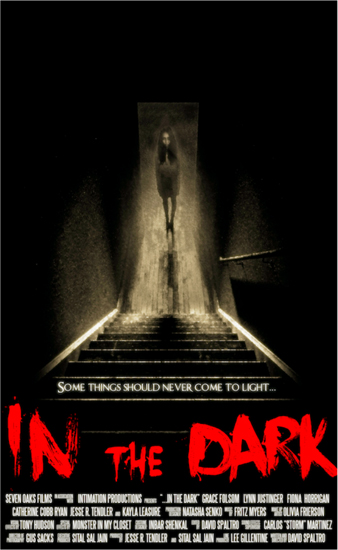 ‘In The Dark’ Trailer & Poster Released

“…In the Dark” is my  attempted shot of energy and breath of fresh air in a popular, but overcrowded genre marketplace, combining both the appeal of the thrills and chills that is a staple of the horror genre, as well as a strong, original story, headed by a female cast of some of NYC’s most talented actresses. A lovingly bloody valentine to the  inspirational works of Stephen King, John Carpenter, The X-Files, and 1973’s “The Exorcist”; the film’s strikingly haunting visual images from cinematographer Gus Sacks is complemented by over 50 minutes of original music by award winning composer Fritz Myers of Platitude Music ( IFC’s “White Reindeer”, “Sushi Girl”,  Best Soundtrack, 2012’s Toronto After Dark)

On set practical make up effects and creature design were provided by Emmy award winning Monster in My Closet (“Boardwalk Empire, “The Amazing Spiderman 2 “)

Graphics, titles, and additional VFX were created by Visual Effect Supervisor Tony Hudson (http://www.FXVet.Net), an industry veteran with over 25 years of experience including various roles at Lucas’s Industrial Light & Magic and TV show “Star Trek: The Next Generation”

Skeptical grad student, Veronica Carpenter (Lynn Justinger), interviews renowned paranormal specialist, Dr. Lois Kearne (Fiona Horrigan), for her thesis on the benefits of her supernatural research in regards to modern psychology, and joins her on a field study trip to a Brooklyn family home supposedly “besieged by evil spirits”. Once at the residence of nurse Joan Mills (Catherine Cobb Ryan) and Bethany (Grace Folsom), her recently returned daughter, the investigators are immediately confronted with dark secrets, darker energies, unexplainably horrific events, and a young girl who’s affliction tests the boundaries of all their collective research and experience, forcing everyone to confront their own haunted pasts and demons. And what exactly is lying hungrily in wait “…In the Dark”.