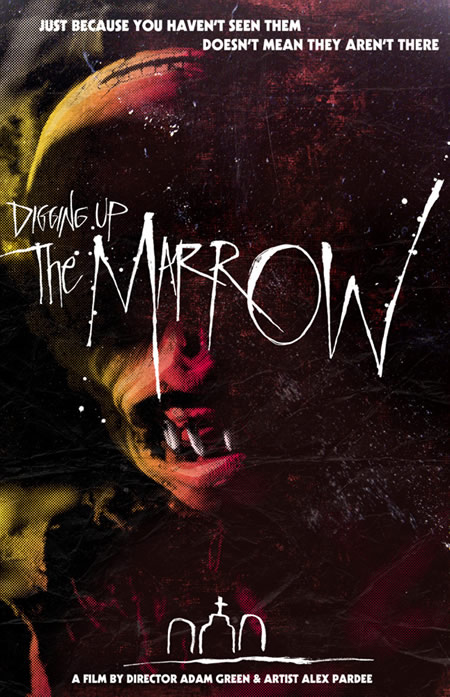 Image Entertainment, an RLJ Entertainment (NASDAQ: RLJE) brand, has acquired all U.S. rights to the highly anticipated fantasy film DIGGING UP THE MARROW.  Starring, written and directed by Adam Green and inspired by the artwork of artist Alex Pardee, the film stars Ray Wise (Twin Peaks, X-Men First Class), Will Barratt (Frozen), and a roster full of horror genre favorites and iconic artists all appearing as themselves.  Mark Ward, RLJ Entertainment’s Senior Vice President of Acquisitions for the Image brands made the announcement today.

“We’ve had a long, productive working relationship with Adam Green and we are extremely excited to continue to work with him on this film,” said Ward.  “Adam brings an uncanny point-of-view to filmmaking and DIGGING UP THE MARROW is one that fans of genre films will certainly rally around.”

When filmmaker Adam Green receives a package from a strange man (Ray Wise) claiming he can prove that monsters exist, he and his crew are taken on a mysterious, fantastical, and terrifying journey into the shadows deep down under the ground below our feet. DIGGING UP THE MARROW is a documentary-style film that blends reality with fantasy in a way that will leave even the most hardcore skeptics believing in the existence of monsters.

“DIGGING UP THE MARROW is the result of an incredibly rewarding four-year creative collaboration,” said Green.   “It’s a very unique film that doesn’t neatly fit into any specific sub-genre that has come before it.  We’ve been thrilled by the overwhelmingly positive response that MARROW has received at early screenings.”

The monsters in the film are vividly brought to life by visionary American Artist and Trans-Media-Artistry Pioneer, Alex Pardee.  Pardee has showcased his fine art in galleries around the world; acted as an art director for numerous bands (including ‘The Used’ and I’n Flames’); worked with film directors such as Quentin Tarantino and Edgar Wright on art-based-marketing campaigns; and provided extensive artwork for director Zack Snyder’s “Sucker Punch.  In 2007, Alex co-founded “ZEROFRIENDS,” an art and apparel company that he is currently the Creative Director of.