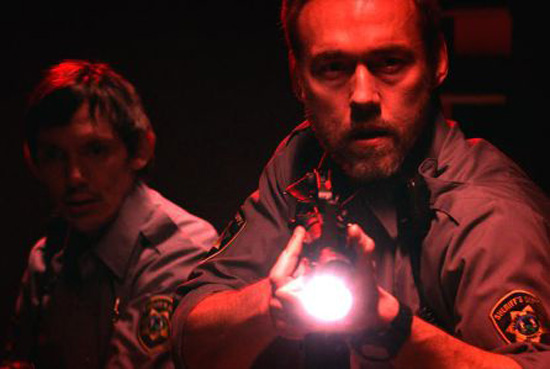 “DARK WAS THE NIGHT received an overwhelming response at ScreamFest and the Film Society in New York,” said Ward.  “We are excited to bring this film to the genre community on the big screen and digital platforms.”

Kevin Durand (The Strain) and Lukas Haas (INCEPTION) star as local policemen who go to battle against an ancient evil in the film that CRAVE ONLINE called “an exquisite creature feature.”  The script, from Tyler Hisel, appeared on the 2009 Black List of best un-produced scripts, a rarity for the monster genre, under the title THE TREES.  Rounding out the cast are Bianca Kajlich (Undateable), Sabina Gadecki (the ENTOURAGE movie), Heath Freeman (SKATELAND), Steve Agee (@midnight) and Nick Damici (LATE PHASES).

The deal was negotiated by Mark Ward on behalf of Image Entertainment and by Dallas Sonnier on behalf of Caliber Media.

The film begins when a long slumbering evil is awoken in the trees outside the remote town of Maiden Woods. Isolated and threatened, it sets its sights on the townspeople, as Sheriff Paul Shields (Kevin Durand) attempts to overcome the demons of his past, so that he may protect thoe lives of the people he loves.

“Since we premiered at ScreamFest, Mark and his team at Image have been passionate supporters of the film and of our company,” said Heller and Sonnier.  “The film is in very good hands and we are excited to bring this story to a wider audience.”