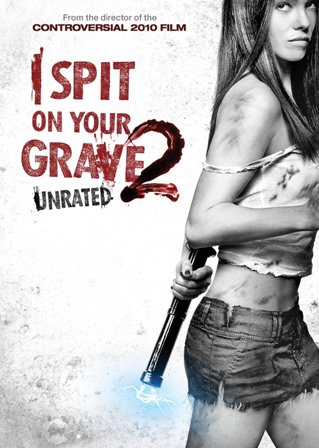 I Spit On Your Grave 2 Review

Chances are that if you’ve seen the original I Spit On Your Grave or its 2010 remake, or The Last House On The Left or its subsequent 2009 remake, you already know what you’re getting yourself into by sitting down to watch I Spit On Your Grave 2.  If you’re not familiar, I will try to break it down as best as I can.  A person, generally a female, encounters other people who (to put it as blandly as possible) do really bad things to her.  Once her attackers have finished, she is pretty much left to either die or fend for herself.  At this point, if she is still alive she overcomes pretty insurmountable odds and eventually stalks, gruesomely tortures and kills those who have wronged her.  If she isn’t alive, the same task typically lands in her family’s or other loved ones’ hands.  In the end the results are still relatively the same.

While it’s no tremendous surprise that these types of movies aren’t huge contenders at the more mainstream annual awards ceremonies, that’s not to say that they are poorly crafted films.  They just tend to have a smaller fan base due to the graphic, yet somewhat realistic, nature of their content while a good percentage of moviegoers are more inclined to watch high school kids happily perform ridiculously choreographed dance routines.  Hell, that’s EXACTLY how my high school was (if you subtracted all the bullshit and added daily dance numbers that is).  The problem with that is that people are victimized at far greater rates in this world than cliques of teenagers magically getting over their differences and coming together in celebratory dance.  But that’s what people want to see and unfortunately in some instances it makes the majority who can’t stomach the more extreme movies have some type of negative opinion of the minority who can.  Anyway, I’ll stop acting like the old man shaking his fist at the end of his driveway now.  Everyone is entitled to enjoy what they want to enjoy, regardless of whether it falls on the silly end of the spectrum or the intense end.

Katie is sitting with a friend in the diner she is employed at.  They’re discussing Katie’s desire to model and the necessity of getting a good photographer and how expensive that can be.  When she leaves work for the night she notices a flier on the wall for a photographer and tears off a tab hoping this could change her life.

When she arrives home she encounters her building manager in the hallway unsuccessfully trying to catch a rat.  Katie finds this to be humorous and offers to help him after seeing the rat run into a nearby crack in the wall.  Taking some wire from among his tools she creates a noose that she hangs in front of the crack, thereby ensuring that the rat will be caught when he exits his hiding place.  While doing this, she is subtly flirting with the handyman and we learn that she moved to New York from Missouri where, among other things, she learned to catch rats on her farm.  After some more small talk Katie goes to her apartment.

While looking through her portfolio she decides to give the photographer a call.  The voice which answers has an easily discernible eastern European accent.  He is short with her and tells her to text pictures of herself, which she does.  In response she receives a text with a date, time and address.

A taxi pulls up in front of a building and Katie hops out looking for the proper address.  Entering the building she happens upon a photo shoot already in progress.  She meets Georgy, with whom she spoke to on the phone.  Ivan is busy taking pictures of the current model and Nikolai is asleep.  Katie goes to get changed and soon her shoot is under way.  Things seem to be going very well for her when Ivan begins asking her to be more sensual and show more skin, eventually asking her to remove her dress.  She gets upset by this, accusing them of wanting to sell her pictures on the internet.  By now Nikolai is awake and makes some rather rude remarks to her.  Katie promptly leaves and when she gets home, ends up finding the entire episode amusing, laughing to herself.

The next afternoon after she arrives home from work Georgy appears at her door with a thumb drive containing the pictures of the previous day’s shoot.  Unnerved, Katie repeatedly asks him to leave, which he does but only after uncomfortably overstaying what little welcome he had.  Later, after going through the pictures, she takes her garbage down to the end of the hall after propping her door to stay open so she wouldn’t be locked out.  This is what is known as foreshadowing.  She brings her garbage to the chute and goes inside to brush her teeth before going to bed.

Later in the night she is awoken by a repetitive sound somewhere in the dark of her room.  As her eyes adjust she realized Georgy is sitting in a chair across her room taking pictures of her.  Katie is able to briefly subdue him with a stun gun and escapes to the hallway but Georgy is too quick and powerful for her and drags her back inside.  After smashing her head into the floor, he binds her with electrical cord.  At this point, the building manager from earlier begins banging on her door asking if she is ok before announcing that he is coming in.  Upon entering though, he is stabbed in the stomach by Georgy numerous times.  He falls to the floor and his last visions are of what Georgy then does to Katie.

This is the point in the movie where the “really bad things” referenced in the beginning of the article commence.  Those of you who are familiar with movies cut from the same cloth need no real explanation here.  You’ve gritted your teeth through scenes like this before and you’ll grit your teeth again watching this movie.  For the rest of you who have yet to experience movies like this, good luck.  It’s not for everybody, but just keep reminding yourselves that in the end, the atrocities Katie endures will be visited tenfold upon her attackers.  And no, I don’t consider that a spoiler because the revenge aspect is an equal part of the equation when it comes to this type of film.

Again, there’s a reason that there aren’t five or six movies like I Spit On Your Grave 2 released every year.  There just isn’t as broad of an audience that can endure 90+ minutes of brutality (in the same sense that I could never stomach any minutes of High School Musical), regardless of how greatly it is deserved in the end.  Even I fell victim to some face-cringing and had to resort to a near fetal position on my couch at times – but that means that the movie did its job.

Jemma Dallender truly owned her role as did virtually every other cast member, which is also in great part due to excellent direction (Steven Monroe also directed the I Spit On Your Grave remake back in 2010).  Additionally, something I never usually take great notice of in a movie is the lighting, but since a good deal of this movie is set in dark spaces, it was hard not to appreciate what minimal lighting was used.  This created more of a dismal, dreary surrounding than one of haunted suspense, the former being exactly what best suited those points in the movie.

While I enjoyed this movie and would definitely recommend it to other horror aficionados whom I know have the stomach for it, I probably wouldn’t try to push it on my coworkers at my corporate nine to five gig because I try to keep those two worlds apart for obvious reasons.  That being said, this article is intended for you and you wouldn’t be on Horror News Network if you didn’t also share a disciplined fascination with all things gory and macabre, right?  Right!  Therefore if I wouldn’t recommend it to my coworkers that should logically make you WANT to see it even more, right?  RIGHT!  See what I did there?  Besides, it’s no more disturbing (or gory for that matter) than what Miley Cyrus has been doing since her tenure on Disney.