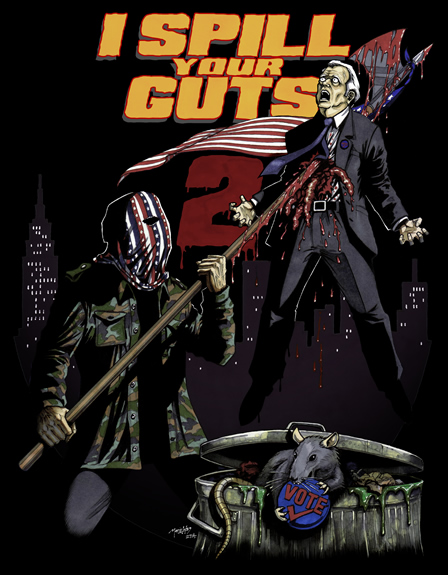 I Spill Your Guts 2 Announced

I Spill Your Guts 2 Announced

Just announced from Writer/Director, James Balsamo is “I Spill Your Guts 2.” Balsamo’s first “I Spill Your Guts” quickly became an underground hit with horror fans. Now he and his company, Acid Bath Productions, have launched an Indiegogo campaign to start production on the follow up.

Synopsis: A blood-crazed vigilante is carving through New York’s political empire, dismembering one corrupt politician after another.Only known as the American Executioner, this mask-wearing maniac is fueled by revenge to kill a senator who he blames for losing his voice and the suicide of his fiance. This hooded assassin, with nothing to loose, has his sight set on the sex-craved senator whose lust for big-breasted women may cost him more than his political career. As he disembowels money-hungry sleazebags, no one is safe from this savage military mercenary.Tortured by the voices in his head and haunted by the ghosts of his victims, the only way to bring closure to his madness is to paint the city red with revenge. A hero to some and a nightmare to others, The American Executioner is lurking the streets. Just hope he’s not coming for you in I Spill Your Guts 2.