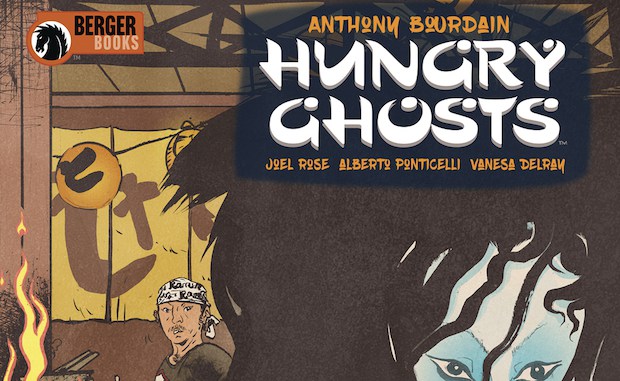 When the Berger Books imprint was announced last February, many long-time Vertigo Comics fans were naturally excited at the prospect of being able to enjoy a whole new set of original and edgy stories, all under the guidance of Karen Berger.  The first series from the imprint (in conjunction with Dark Horse Comics), Hungry Ghosts, is no exception, although many fans were surprised to see the name of celebrity chef and television host Anthony Bourdain on the cover.

Horror News Network was excited to get a chance to interview co-writer Joel Rose about his new series, his work with Bourdain, and being reunited with Berger.

Horror News Network:  How would describe Hungry Ghosts to a comic book and horror audience?

Joel Rose:  Think of comics’ golden age. The wonderful, unrepentant, 1950s, run of Entertaining Comics (E.C.) terrifying Tales of the Crypt, Vault of Horror, and Haunt of Fear. We’re right there, in its midst. Like other E.C.’s spin-offs: Tomb of Terror, Haunted Horror, Haunted Thrills, Quality Comics’ Web of Evil, this is what Hungry Ghosts is to us. This is where we’ve come to play.

HNN:  This is your second series that you have written with Anthony Bourdain.  How did the two of you meet and decide to collaborate?

Rose:  Tony and I have known each other for a long time, and have collaborated many times over. I had a background in comics (used to work for DC, edited and wrote) and his first love was comics; he longed to be a writer and artist. He mentioned a number of times his desire to work together on something, and one Thanksgiving, on the way out the door, he pitched me an idea, and I went for it.

HNN:  Both of your series (Hungry Ghosts and Get Jiro!) either take place in Japan or have a heavy Japanese influence.  Why does the culture appeal to you and Anthony?

Rose:  While on his first trip to Japan, before everything happened, while he was still cooking at Les Halles, thinking it would never end and he would die on the line, Tony sent me an email. He had just arrived, had spent the morning at the fish market, and was in his hotel room, looking down on the city and lines and lines of traffic. The email was the best: funny and insightful, and it set him down a path, and I’ve been with him on at least part of it (that email morphed into Kitchen Confidential), at least as goes the comics part of it. He often says ask any chef, if they had the rest of their days to spend anywhere they choose, where would it be? Not only did Tony turn me onto the food, but also the gangster movies, the anime, the manga, the extraordinary attention to detail and spirit of Japanese art and culture. There are many things of the highest order to take away from Japan, and in Hungry Ghosts, we’ve taken away comic books.

HNN:  The “100 candles game” has a long history in Japan.  Do you see this sharing of scary stories as an essential component of the Japanese culture, or any culture for that matter?

Rose:  What we’ve found enticing is the posturing involved in the game, the inflated chests, the brandished egos of the story teller, the shared lot of the terrified. We loved the game of Kaidan and wanted in the worst way to explore it. And who better, we thought, to take up the mantle, but the ever-posturing chef. Of all powers, feeding the people will always take precedent. That we could play with fear and horror in the kitchen and abroad, gives us special delight. 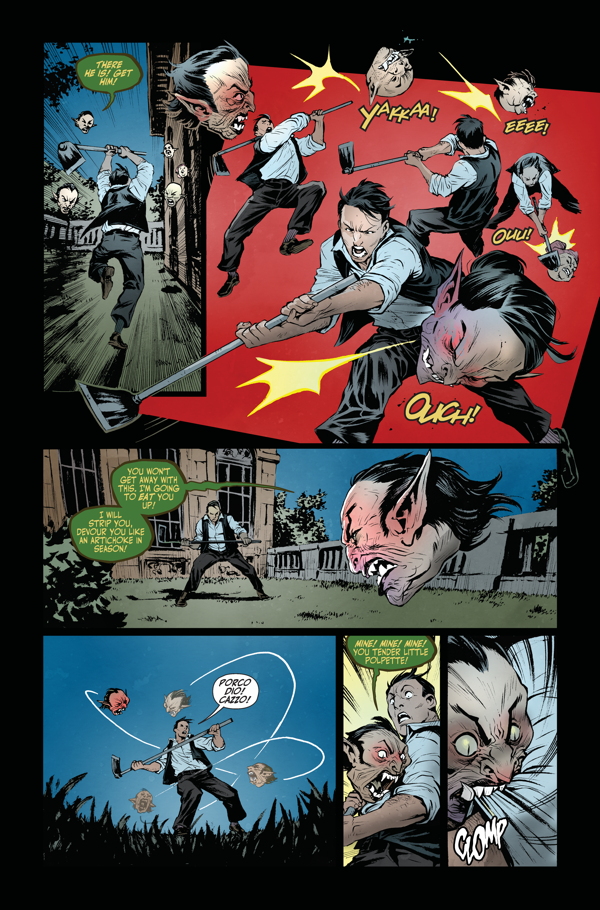 HNN:  What process did you use when selecting the different artists for the stories?

Rose:  Working with Karen Berger gave us access, not only to her incredible experience, talent, and vision, but also her unmatched access to premier artists. Both Tony and I shared a wish list, and Karen did her best to make that happen while adding her own suggestions. We are extremely happy and impressed with those individuals with whom we came to work.

HNN:  What was it like working with Alberto Ponticelli and Vanesa Del Rey?  How would describe both of their styles and their work on the series?

Rose:  Alberto took a lot upon himself. Not only did he do the framing story, but also The Starving Skeleton, which was not easy because he was left with a minimum of pages to set the tone for the entire series. He did it with style, eye to detail, and captured iconography. Vanesa del Rey, what can I say? Her work is voluptuous, provocative, full to running over. She was where we wanted to go with The Pirates, our best, first, and only choice.

HNN:  Hungry Ghosts is one of the first Berger Books to be released by Dark Horse.  What made you decide to be a part of the launch and work with Karen Berger once again?

Rose:  Are you kidding? Karen Berger stands higher than the highest, deeper than the deepest! When I was at DC’s Paradox Press, she was down the hall at Vertigo. We became friends then and never lost touch. I took Jiro to her, and when it came time for Hungry Ghosts, there was no place I’d rather be, and she honored us by saying let’s lead with this. So, it’s very cool to work with her again.

Rose:  We’re on a roll. We would love to do more Hungry Ghosts, if that should come to pass.