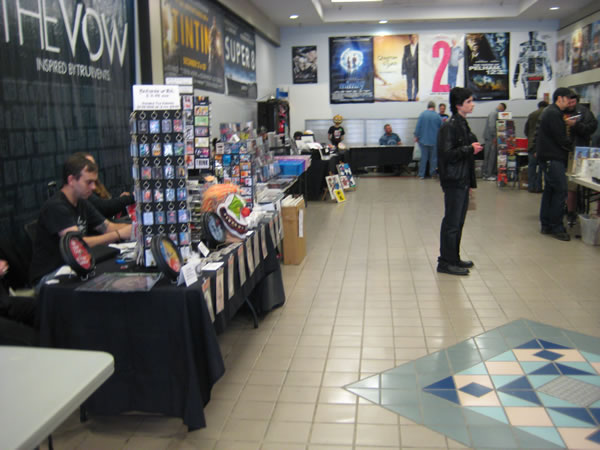 Here are some images and a write up of the event.

On a mild mid-November day, throngs of hungry horror junkies packed the Silver Cinemas in Poughkeepsie, NY for the bi-annual movie fright-fest Hudson Horror Show.  Last Saturday was the festival’s eighth installment, and promised to be chock full of lost trailers, giveaways, 35 MM goodness, vendors, and the incomparable Kurt Russell.  HNN’s Sean McLaughlin and Bill Burns were there to capture all of the action and partake in the terror-filled festivities.  And as usual…..Chris Alo and the gang did not disappoint.  This installment featured a John Carpenter-Kurt Russell main event (The Thing, Escape From New York), along with one of the many Christopher Lee/Peter Cushing horror team-ups (Horror Express) and yet another fun exploitation romp (Invasion of the Bee Girls).  Of course, Hudson Horror promises (and delivers) a “mystery movie” at every event, and this was the first time that the title was actually kept under wraps until the reel started rolling…..and it didn’t disappoint.  While we all swore an oath of secrecy to Mr. Alo, we can say that the mystery movie was an ‘80s cult classic starring a television sci-fi actor, with a little-known alternate title and was a print never before shown in the state of New York before this.  And once again, the rare and lost film trailers kept the crowd in their seats; everything from boobs-and-comedy from the ‘70s (When Women Had Tails, Panorama Blue) to action stars in their prime kicking ass and taking names (seemingly every Dolph Lundgren vehicles from the ‘80s).  The loyal legions of Hudson Horror-philes were sent home happy, and we can’t wait until next year when Hudson Horror 9 takes over the tri-state area.