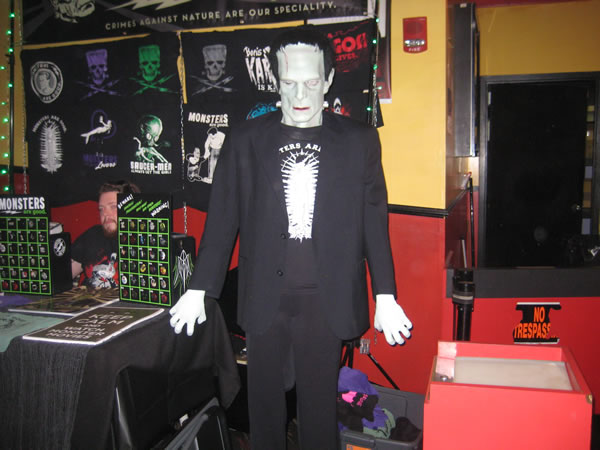 On Saturday, June 8th, one of the best horror film festivals in the Northeast, the Hudson Horror Show, returned to Poughkeepsie, NY for its 7th installment. This growing festival is rapidly gaining steam, as this version marked the first time that “day of show” tickets were sold out. Also, Hudson Horror VII featured more vendors than ever before, everything from rare horror DVD’s to horror action figures, T-shirts to original horror art. The film line-up this time around was led by the 20th anniversary of Sam Raimi’s brilliant Evil Dead sequel Army of Darkness, Texas Chainsaw Massacre 2, horror sci-fi flick Infra-Man, Duke Mitchell’s quirky exploitation rarity Gone With The Pope, and Lucio Fulci’s classic gore-fest House by the Cemetery. The latter was especially delightful to me, as this was the “secret” film that wasn’t announced until two weeks prior.

A long-running added bonus to attending a Hudson Horror event is the classic trailers for obscure and long-lost movie gems. This time they surely did not disappoint, with original trailers for films like The Doberman Gang, Hellbound: Hellraiser II and Hell Night lighting up the screen. Also, independent movies were shown a little love as “The Giant Spider” (All for George Productions) and “Midnight Show” (https://www.facebook.com/midnightshowmovie) had their trailers revealed…..well, almost revealed in the case of “Spider”. It’s definitely worth a look, though.

Between the 35 MM horror goodness on the big screen, and the monster selection of horror vendors and artists, Hudson Horror fans went home happy and salivating over the prospect of Hudson Horror VIII, tentatively scheduled for this December.

HNN’s Larry Dwyer and I were on hand to cover the fun and the madness, and were lucky enough to introduce Duke Mitchell’s Gone With The Pope to the horror crowd (giving away some goodie bags to a few horror trivia buffs along the way). Check out my Twitter timeline (@Makasupa) for real-time coverage of the event, and enjoy the pictures below taken during the height of the craziness. Thanks again to Chris Alo, Dan Deyo, and the incredibly gracious and dedicated staff at Hudson Horror. We’re already looking forward to Hudson Horror VIII!