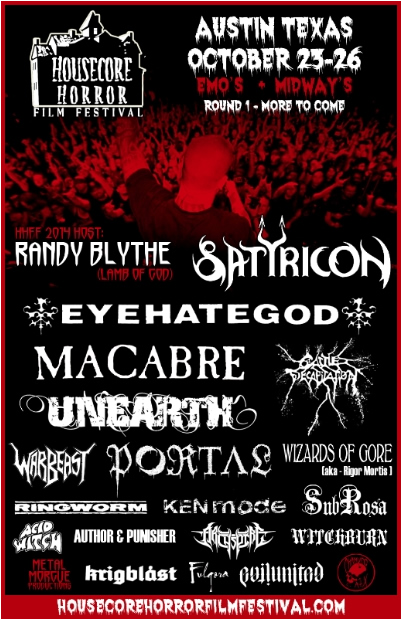 This year promises to drench eardrums in blood and distortion with a hugely diverse array of metallic talent from Norwegian black metal legends, Canadian noiseniks, Australian masters of death, American thrash maniacs, and tons more. Without further ado, clap your eyes on the first round of band announcements for this year’s Housecore Horror Film Festival!

Wizards of Gore (AKA Rigor Mortis)

On top of all that, we’re excited to announce that the one and only Randy Blythe (Lamb of God) will be joining in the fun with us at HHFF this year. He’ll be on hand for a live interview after a special screening of ‘AS THE PALACES BURN’ and is set to be a guest presenter at the Rotscars.

This outstanding collection of heavy metal’s best and baddest will be joined by plenty of others, including a few that will blow your head clean off!

Prepare yourselves Horror movie fans, HHFF has already announced a jaw-dropping film event to celebrate the 40th anniversary of the most important film in Texas history, THE TEXAS CHAIN SAW MASSACRE. Not one, not two, but ALL of the living members of the main cast have agreed to appear at HHFF ’14, including:

Brace yourselves for an all out assault on your senses this October courtesy of Housecore Horror.