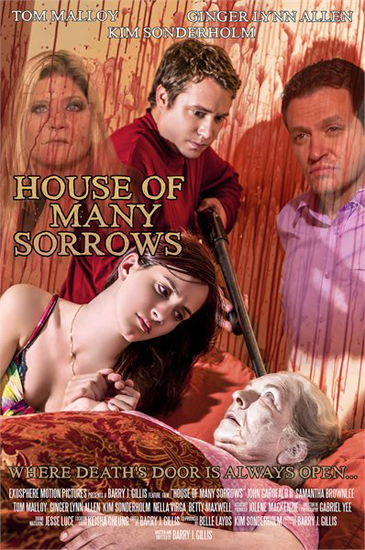 ‘House of Many Sorrows’ Trailer and Poster Revealed

written by Lynn Sorel April 29, 2015
Share FacebookTwitterRedditEmail
From The Press Release
Fresh off an around the clock marathon editing and sound mastering session, Director Barry J. Gillis states that the time has finally arrived for horror fans to get their first glimpse of  ‘House of Many Sorrows’, starring Ginger Lynn Allen, Tom Malloy, and Kim Sonderholm.
‘House of Many Sorrows’   is a horror movie about guests of a country inn who begin disappearing and dying, after a mentally unstable man takes over his terminally ill mother’s bed and breakfast operation. “ We are so excited about the release of the Movie Trailer, and delighted to have the Movie Poster revealed to the public for the very first time.” States Gillis.
Laurence R. Harvey of ‘The Human Centipede’ fame, also makes a special appearance in the movie. “Laurence does make an appearance in the movie, and I am overjoyed with his performance, but that is all I can tell you at this time.” comments Gillis.
Barry J. Gillis is responsible for bringing the world ‘Things’ (1989) starring Amber Lynn, ‘Wicked World’, and ‘The Killing Games’. Gillis says that this is his best movie yet. “Ya, I know the fans hear this line of bull all of the time, but one look at the movie trailer, and horror fans, will know right away that it is my best movie yet.”
Currently ‘House of Many Sorrows’ is in Post Production in Edmonton, Alberta.
According to Gillis, the editing is coming along fine. His next movie, ‘Unlawful Detective’ will star Len J. Philips, and Kim Sønderholm, and be shot in Toronto, Canada, in 2016.
https://youtu.be/nUgfhDhKnBI