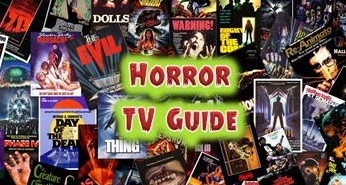 Greetings fiends! Well, December is here and The Walking Dead is gone until February. Thankfully there is plenty of horror on the TV this month so don’t you worry. If you’re anything like me, you can use another Christmas movie as much as Beth Greene can use another hole in her head, right? What…too soon?

Speaking of Christmas, let’s start it off early Tuesday morning with Silent Night, Deadly Night on Showtime Beyond! Later on catch Ginger Snaps on Chiller. Early Wednesday check out His Name Was Jason: 30 Years of Friday the 13th on Encore Action; it’s a killer documentary. On Wednesday night American Horror Story returns to FX to melt some faces and on Thursday morning head over to Epix East for The Town That Dreaded Sundown to see where the inspiration for Jason’s mask from Friday the 13th Part 2 came from. On Friday morning Chiller brings you the classic Re-Animator and SyFy is running a Z Nation marathon all day.

Catch you Friday with the weekend edition!