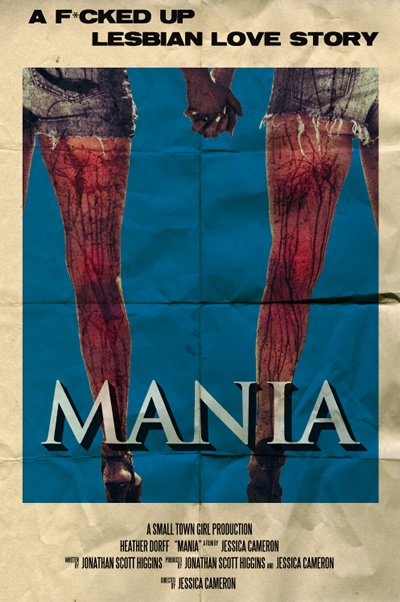 Jessica Cameron and Jonathan Scott Higgins (Truth or Dare) are preparing for their triple feature cross-country horror project with feature film MANIA and the documentary Kill the Production Assistant. They are pleased to announce their collaboration with filmmaker Ryan M. Andrews (Save Yourself, S.I.C.K) with his feature film, Desolation. Check out the new double-bill Grindhouse poster below.

MANIA was written by Higgins and will be Cameron’s 2nd directing vehicle. Kill the Production Assistant will be the feature-length documentary that catalogues the entire experience so that YOU can get a glimpse into the independent world of filmmaking. Cameron and Higgins will produce all three projects. Desolation will replace The Exiled (dir. Brandon Slagle, starring Devanny Pinn) on this film slate. The Exiled has been pushed to a later date. “

This November, Cameron, Higgins, and Andrews will load into an RV with other cast/crew and depart from Los Angeles to make back-to-back feature films while traveling cross-country. Read below for more information.

Filming will take place all over the United States, but the filming locations will be decided upon by the amount of fan participation. The city and states with the most interaction and financial contributions through the project’s website (killtheproductionassistant.com) will determine the route the filmmakers will take. The more people contribute, the more pins will be dropped onto a digital map on the project’s website for the home city/state of the contributor. Thus far, the top states are Arizona, Pennsylvania, and California.

By visiting www.KillTheProductionAssistant.com fans can contribute to the project and get cool merchandise.

ABOUT THE FILMS BEING MADE DURING THE CROSS COUNTRY TRIP:

Directed by: Ryan M. Andrews
Written by: Ryan M. Andrews
Starring: Jessica Cameron & Heather Dorff
Tagline: She’s been waiting for you
Synopsis: Along the back roads of America, a hitchhiker is waiting.Gorgeous, mysterious and full of sadistic rage, what chances do an unsuspecting couple have
against her?
Social Media:
Facebook: https://www.facebook.com/DesolationtheMovie
Twitter: https://twitter.com/DesolationMovie

Directed by: Aaron Lane
Synopsis: A feature-length making-of documentary, chronicling the travels and filming of MANIA and Desolation. This is a chance for audiences to see a grassroots
approach to independent filmmaking.
Social Media:
Facebook: https://www.facebook.com/KillThePA
Twitter: https://twitter.com/KillThePAdoc