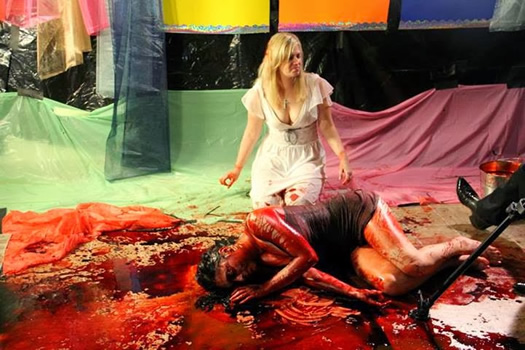 Synopsis: Six college kids find internet stardom when they make “Truth or Dare” videos with a violent twist. It is all fun and games until their number one fan decides he wants to play by his own rules.

Our Thoughts: The story driving “Truth or Dare” is shocking, unpredictable, yet really drives the point home of “be careful what you wish for.”  Once the group of college students gain their own internet stardom playing a fake truth or dare game, they become the obsession of a deranged fan Derek.  Derek, by the way, is played perfectly demented by Ryan Kiser, who gives a standout performance.  From here all hell breaks loose.  I won’t give any spoilers out since there are so many shocking and grim twists and turns. Some of those moments definitely pay tribute to James Wan, as the character’s pasts coming back to haunt them in gruesome ways.

“Truth or Dare,” the directorial debut from Scream Queen, Jessica Cameron is a stellar and solid piece of work, which shows a lot of promise, especially for women being in the driver’s seat of horror. Horror fans will definitely not be disappointed with the absolute blood and gorefest. Cameron does a fantastic job of keeping the audience engaged by the quick pace of the film as well.  However, don’t be mistaken, there is a definite message and storyline driving this madness. The movie is an in your face, glaring commentary on the internet and the effect it can have on young people.  While we live in the age of “instant celebrity” via social media, Cameron does a great job of having that reality, and more importantly the repercussions of that mentality, drive the chaos.