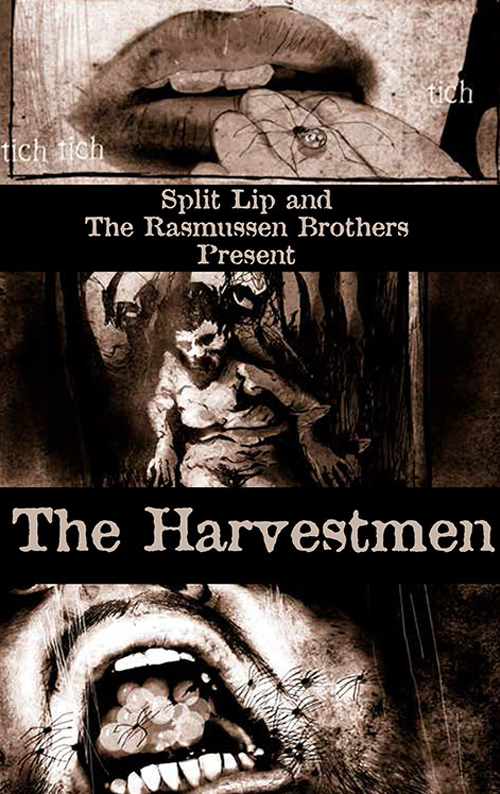 Horror Movies Based on Split Lip Webcomics Are In The Works

The Harvestmen will be the first comic adaptation coming from Sinister Sibling Films. Here is the official release:

The Rasmussen Brothers under their shingle Sinister Siblings Films have partnered with Sam Costello to produce horror films based on his Split Lip webcomics. The first of these adaptations will be The Harvestmen. Written by Sam Costello and illustrated by award-winning Finnish artist Sami Makkonen, the creepy tale takes its title from a group of reclusive arachnids.

Sam Costello created Split Lip in 2006 and since then has built the brand into a successful online series. Inspired by the classic weird tales of The Twilight Zone, Split Lip is an anthology of three dozen dark stories written by Costello and drawn by artists from all over the world.

The Harvestmen concerns a young woman who moves into a rundown apartment only to find that her building is plagued by intrusive neighbors and an odd infestation.

“We’re very excited to be working with Sam on this project. He is an amazing talent and we have been big fans of Split Lip for some time now. It’s our goal to bring a New England sensibility to our horror projects. After all, this is where American horror got its start, with the likes of Poe and Lovecraft,” says Michael and Shawn Rasmussen.

The Brothers plan to reveal more details about the project and the partnership later this month at this year’s Fantasia Film Market which they will be attending with another project that was selected for their Off-Frontieres line-up called Subculture.

Sami Makkonen, artist of The Harvestmen, lives in Helsinki, Finland. His art has appeared in the Eisner-nominated Hatter M graphic novel series, the Deadworld graphic novel series, and in magazines. He was the first recipient of the Sarjis award for the best fantasy comic (writer and illustrator).