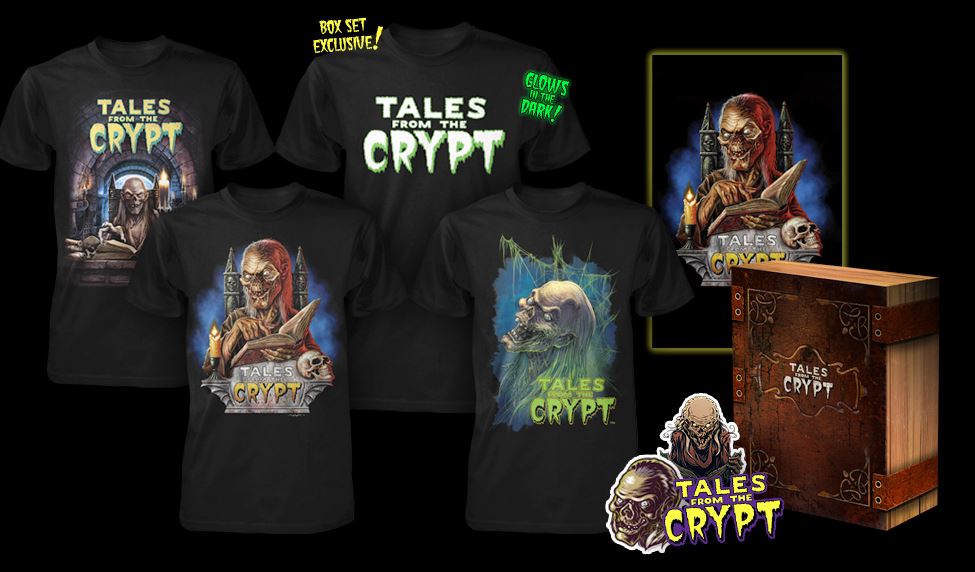 Horror Hunting! For the Week of June 23rd

Welcome back to Horror Hunting!, for this final full week of June.  In this edition we’re featuring a special limited-
edition throwback shirt set from a ’90s era HBO classic series, as well as a little something for you horror/wrestling fanatics from
the Spawn master.   Can’t go wrong with that killer line-up!

As were most blood-thirsty fiends, I was a huge fan of the HBO original horror series “Tales From The Crypt.”  The Cryptkeeper, the
spooky storylines, dark humor….it all added up to a brilliant show that kept us satisfied week-by-week.  I always felt that TFTC
was what we WISHED a modern-day Twilight Zone would be, and what Tales From The Darkside mostly achieved (with a good amount of
speed bumps along the way).  While the series became a bit too goofy for my liking near the end of its run, the mark it left on the
horror TV genre (now being embodied by hit series like The Walking Dead, True Blood and Bates Motel) is undeniable.  Thankfully, the
folks over at Fright-Rags are fans as well, and beginning on Friday morning, June 27th, will be offering a special limited edition
set of t-shirts honoring the Tales From The Crypt lineage.  A cost of $115 will net you three limited edition shirts, two special
glow-in-the-dark logo tees, a sticker pack, poster and collector’s box.  This cool set is (again) limited to only 200, so getting
there Friday morning for the presale is essential.  Check it out!

If you’re a big fan of both horror and pro wrestling (like I am), you can appreciate this resin statue currently offered by
McFarlane Toys.  Todd McFarlane has been a favorite of mine since the early-to-mid ’90s, and his sports, comic book, horror and
fantasy action figure lines are absolutely unparalleled.  With his homage to The Undertaker, he perfectly captures the essence of the
Dead Man (or American Badass, whichever wrestling era you prefer).  Since this statue is sans Harley but does include the classic
urn, it more than likely is based off of the post-Attitude Era.  But regardless, this is a one-of-a-kind piece, and a must for any
hardcore fan.  Limited to 750 pieces and complete with a certificate of authenticity signed by Mr. McFarlane himself, this item will
run you $295.  Small price to pay to “rest in peace.”  Bad references aside, check out the brilliance.