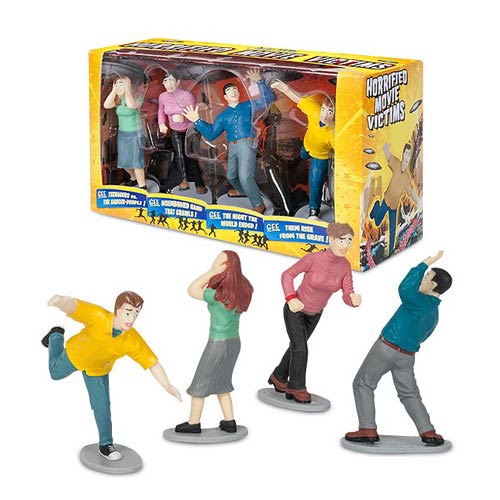 Welcome to another installment of Horror Hunting!, as August officially kicks into gear.  The waning summer weeks also give us some of the best horror conventions of the year (CT Horrorfest, August 23rd, Waterbury, CT!!!), which makes this one of the more exciting times to be a horror fan all around.  In this edition of HH!, we’ll be taking a look at the ultimate horror gag gift for that horror fanatic friend of yours, sure to please their hardcore sensibility.  And of course, collectors of all things ghoulishly vintage will get a kick out of our old-school pick of the week.  Without further adieu…..

I’m sure you’re like me and love nothing more than to create your own 1:50 replica of the most horrifying and blood-splattered horror movie scent imaginable.  Monsters, aliens, zombies, vampires and general weirdos with butcher knives creating some havoc and forcing their unique brand of reality to unsuspecting normal folk is always my go-to diorama scene.  While it’s easy to find action figures and statues of the killers for the playset, being limited to using Barbie and My Little Pony characters as the unfortunate
victims tends to get old very quickly.  Have no fear , as Entertainment Earth has your back with the “Horrified Movie Victims” box set.  Each of the four figures, representing regular everyday people who are reacting to the lovely carnage around them, will now fit perfectly in your murder scene with Jason, Freddy, Michael Myers, etc. running after them.  This set will run you $9.99 but hey….no artificial horror movie recreation for the kids is complete without the helpless prey.  Now you’re all set.

Hopefully, those over the age of 30 can remember Psycho as the brilliant Hitchcock masterpiece, and not the ill-advised Vince Vaughn/Anne Heche bore-fest that the remake became.  Here’s an idea:  when remaking an iconic movie (which is a big mistake to begin with), put somewhat of a spin on it so it’s not just an attempt at an exact carbon copy.  But I digress……  That tiny, start-up auction website “EBay” is worth a look for this awesome, authentic 1960 movie poster from the original “Psycho.” For only $1,500, you can own this piece of cinematic nostalgia (and excellence), trumpeting the arrival of one of the classic films in the horror genre.  The 22X28 Style A Half Sheet poster will serve as a reminder that the innovative Mr. Hitchchock was the first director to ever show a toilet flushing on film and ordered all movie theaters to refuse admittance to any movie-goer that shows up late (to avoid the equivalent of spoilers…..ah, the pre-internet days).  If you’re a big Hitchcock fan (which I am) and you have
that much money burning a hole in your pocket (which I don’t), this poster is absolutely killer.