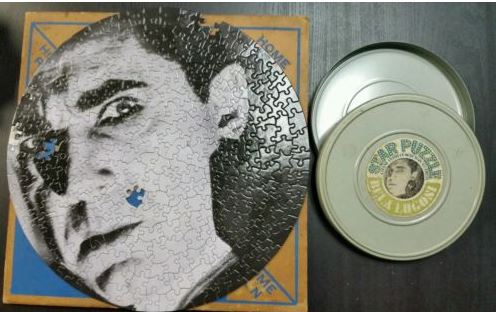 Welcome horror fiends to an all-new installment of Horror Hunting!  It’s been a while since the last column, so for this edition I’ve hand-picked two nostalgic and sublime horror pieces that are sure to please.  These lovingly bloody toys may even look pretty damn good under the tree for that special someone this Christmas….as long as your online auction skills are up to par.  I realize the wait has been unbearable if you’re a true horror toy aficianado, so without further adieu away we go……

Who is the one person that nearly all pop culture geeks associate with the iconic film role of Dracula?  Before Oldman, Lee, Chaney….even the incomparable Leslie Nielsen…..there was one man who set the bar for all undead films to come:  Bela Lugosi.  Okay, you can make a case for Max Schreck, but try and stay with me here.  In the infancy of horror toys and action figures, Dracula was the guy to get.  Currently on EBay is a nice little slice of horror history, a Dracula puzzle that appears to be from the 1960s (give or take a decade).  Although it’s missing three pieces (out of hundreds), Mr. Lugosi’s mug enshrining the puzzle in black and white is worth the price of admission.  Well, maybe that’s a bit ambitious as the “price of admission” is $300 plus another $12 for shipping.  But hey…..you also get a nifty tin case shaped like a film reel!  If you’ve got the disposable income, this would be a cool addition.

“All your friends are dead.”  What child of the ’80s who ever owned a Nintendo can’t relate to this phrase?  It was the inevitable conclusion to EVERY session of the Friday the 13th video game.  The awesome folks at NECA used their creative collective genius to put a new spin on the Jason Voorhees mold with the video game version.  The throwback box, purple and turquoise colors to simulate pixilation, and surprise game music feature all lend authenticity to this figure, which hit stores back in July of this year (but was originally released as a convention exclusive).  The NECA braintrust keep coming up with new and crazy ideas for its figure line, and this Jason ranks right up there.  Grab them while you can, because once they’re gone…..all your friends are dead.